"When you lose balance, so you have to do an improv over dramatic-end," wrote Janhvi Kapoor 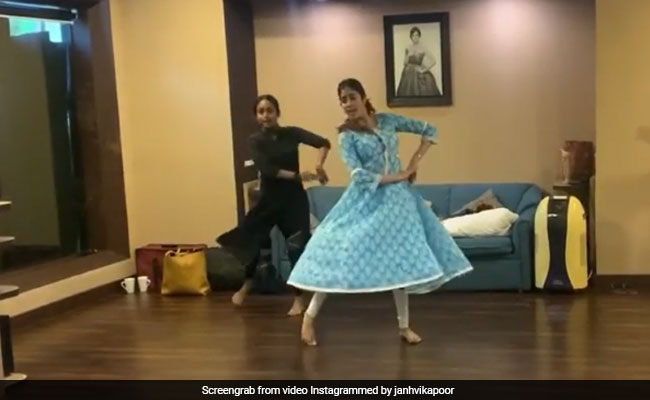 Janhvi Kapoor, who has managed to impress us with her dancing skills on several occasions, especially with her belly dance moves, did it once again. This time the actress performed to the evergreen song Piya Tose Naina Laage Re from Dev Anand and Waheeda Rehman's 1965 film Guide. Dressed in a blue anarkali, Janhvi can be seen dancing beautifully along with her instructor. From her sharp pirouettes, to the graceful expressions - everything was on point. "When you lose balance, so you have to do an improv over-dramatic end." Janhvi wrote. The video garnered a lot of praise from her Instafam.

This is not the first time that Janhvi trended for her dance video. As a part of filmmaker Shashank Khaitan's '#DD2challenge' (Dance Deewane challenge), Janhvi shared a video of herself belly dancing in June, last year. In the video, Janhvi could be seen dancing to the show's theme song. ICYMI, this is the video we are talking about:

On the work front, Janhvi Kapoor has a busy year ahead. The 22-year-old actress has an impressive line-up of films, which includes Roohi Afza, co-starring Rajkummar Rao, Dostana 2, co-starring Kartik Aaryan, and Karan Johar's period drama Takht, co-starring Kareena Kapoor and Ranveer Singh among other stars.

Janhvi Kapoor is the daughter of late actress Sridevi and film producer Boney Kapoor. She made her Bollywood debut with Shashank Khaitan's 2018 film Dhadak, co-starring Ishaan Khatter, which was a remake of the Marathi hit film Sairat.