Janhvi Kapoor Confirms Sister Khushi Will Study Film In US: 'I'm Getting Palpitations' 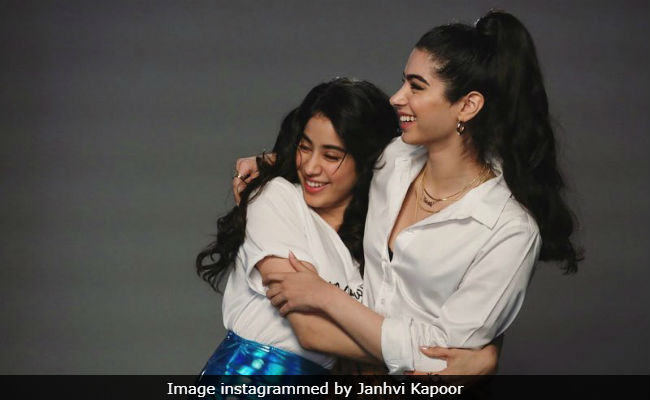 Janhvi Kapoor and Khushi on the sets of a TV show. (Image courtesy: Instagram)

Janhvi Kapoor's sister Khushi is New York Film Academy bound. The Dhadak actress told Hindustan Times that her sister has selected a course in films and she will leave for the US soon, which is making her nervous. "She is going to NYFA. Then after she comes back, she will figure what she wants to do. I'm getting palpitations just thinking about Khushi going to... He (Boney Kapoor) just has to think about it and he'll start crying," she told HT. Khushi is the younger of late actress Sridevi and filmmaker Boney Kapoor's two daughters. Janhvi made her Bollywood debut in 2018 film Dhadak.

Speaking about Khushi, Janhvi also told HT that the only thing they ever fight about is clothes. "We share our clothes, but we have this thing that if you steal without telling, then it's a thing. At this point, I don't care. She still like... She's very righteous, so she is like, 'You cannot take something without asking.' She feels like she needs to inculcate manners in me. So that's where it's coming from," Janhvi said.

Thank you @louisvuitton for dressing us up in these fun outfits for the launch of your ready to wear collection in India! At the newly expanded Delhi store. #LVIndia

Janhvi and Khushi belong to an illustrious Bollywood family. Their father Boney Kapoor is a filmmaker while uncles Anil Kapoor and Sanjay Kapoor are also actors. Janhvi and Khushi's cousins Sonam and Harshvardhan (children of Anil Kapoor) are actors and so is her brother Arjun Kapoor (son of Boney Kapoor and Mona Shourie). Shanaya Kapoor (daughter of Sanjay Kapoor) also recently took her first steps in films as she joined the Gunjan Saxena biopic as an assistant director. The film features Janhvi Kapoor in the lead role.