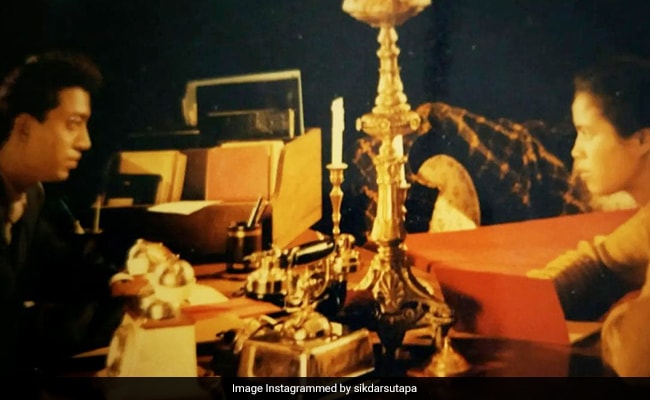 Late actor Irrfan Khan's wife Sutapa Sikdar remembered him today and shared a throwback photo with him. Irrfan and Sutapa married in 1995 after dating for a while. They were classmates, studying theatre. In the post, Sutapa reminisced about the time the couple used to talk, fight and worked together, and soon, decided to leave everything and fall in love. Her post read: "Jab we met and talked and fought and did work together for some time and this was jab we decided to throw everything outside the window and jump out and fall in love.. I am still asking questions you aren't answering like this anymore. Irrfan, I am listening as intently the same way even now why have you found new ways to answer? Miss you is an understatement," she wrote with the hashtag #theatre, #lovestories and #irrfan.

Irrfan made his debut in Mira Nair's Salaam Bombay! (1988). Sutapa is a film dialogue writer and producer. She wrote dialogues for films like Khamoshi, Shabd, and Kahaani. She also produced Madaari (2016) and Qarib Qarib Singlle (2017), both starring Irrfan.

Irrfan Khan died on April 29, 2020 after he was diagnosed with a neuroendocrine tumor and later, a colon infection. They have two sons - Babil and Ayaan.

Earlier, Sutapa shared a picture of Irrfan with Babil that read: "When father and son work on the same film 'on' and 'off' camera - I don't know what they were discussing but it always seemed like a life or death matter (whether it be the difference in the taste of today's nimbu Pani to that of yesterday's or perhaps some actual existential inquiry). Irrfan do you miss our conversations? Babil misses these terribly. may you give me the place of second best conversation companion in your life Babil atam. I know I can never fill the void you feel."