It's Valentine's Day. So Amitabh Bachchan Dug Out An Old Pic With Wife Jaya 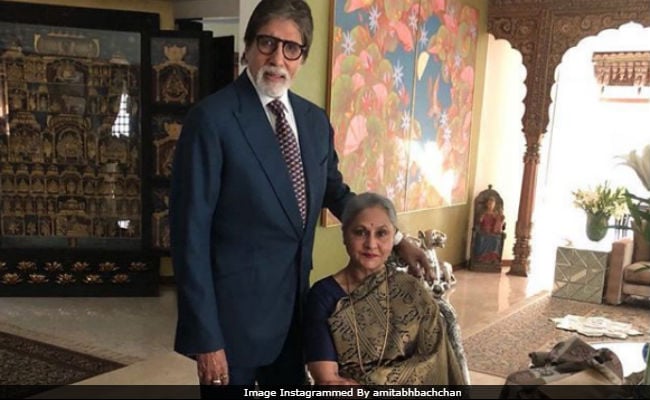 New Delhi: It's Valentine's Day, everyone, and Amitabh Bachchan posted a really old picture of himself with wife Jaya Bachchan. In the picture, the iconic couple share one seat of the car and Big B is seen caressing Jaya Bachchan's hair. "Life's memories are made of gentle moments such as this," the 75-year-old megastar captioned the adorable post. It is not clear whether the picture is taken during a film's shoot or it is from the Bachchans' family album. The Internet just hearts this picture of Big B and Jaya Bachchan. "This is Valentine's special" and "power couple, thank you for sharing this beautiful picture with us," are some of the various comments posted on the picture. Most of the users have commented with several heart emoticons.

Life's memories are made of gentle moments such as this ..

Amitabh Bachchan, thank you for sharing this lovely picture.

Amitabh Bachchan married Jaya Bachchan in June 1973. They have co-starred together in films such as Guddi, Ek Nazar, Zanjeer, Abhimaan, Mili, Chup Chup Ke and Silsila. In 2016's Ki & Ka, the couple appeared together for a cameo.

They are parents to daughter Shweta Bachchan Nanda and son Abhishek. Shweta, a columnist, is married to businessman Nikhil Nanda. They have two children, daughter Navya and son Agastya.

Promoted
Listen to the latest songs, only on JioSaavn.com
Abhishek Bachchan, an actor, married actress Aishwarya Rai Bachchan in 2007. They are parents to daughter Aaradhya.

Amitabh Bachchan was last seen in Sarkar 3. 102 Not Out with Rishi Kapoor will release this May. Meanwhile, he's filming Thugs Of Hindostan, co-starring Aamir Khan, Katrina Kaif and Fatima Sana Shaikh. Big B also has Brahmastra in the pipeline.