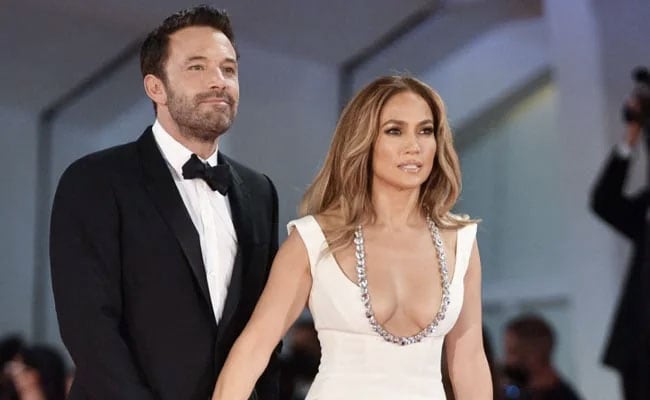 Ben Affleck and JLo at the screening of The Last Duel. (Image courtesy: AFP)

Jennifer Lopez and Ben Affleck - Hollywood's new-old couple, started dating again in 2021. The Gigi co-stars were engaged back in 2002. However, it did not work out then. JLo, in a recent interview with People, said that she feels "lucky" to have got a second chance with the actor. She told People, "I feel so lucky and happy and proud to be with him." The singer described her relationship with Ben Affleck with these words: "It's a beautiful love story that we got a second chance." The star couple made their relationship Instagram official on JLo's birthday last year.

Here's a little background of Jennifer Lopez and Ben Affleck's dating history. The Gigli co-stars were engaged back in 2002. However, it ended in a split two years later. JLo and Ben Affleck were married (and divorced) to Marc Anthony and Jennifer Garner, respectively. They also broke up with their respective partners last year. JLo was previously dating Alex Rodriguez, while Ben Affleck was with actress Ana de Armas.

The rumour mills about Jennifer Lopez and Ben Affleck started when they were spotted on a vacation of sorts in Montana in mid 2021. The couple were reportedly spotted at JLo's Miami beach house as well. Also, they were reports of the couple sneaking in kisses in the middle of workout sessions.

They made their relationship Instagram official on JLo's birthday last year. They also made several red carpet appearances together. The stars were also papped together on several occasions, including the Met Gala.

Last year, Ben Affleck received major social media flak for blaming his ex-wife for his alcoholism. Later, there were reports that Jennifer Lopez was angry with Ben Affleck's statements. JLo denied the rumours and told People, "This story is simply not true. It is not how I feel." She added, "I couldn't have more respect for Ben as a father, a co-parent, and a person."