It Was A Dangal Reunion Of Sorts For Fatima Sana Shaikh, Sanya Malhotra And Nitesh Tiwari

Both Fatima and Sanya posted pictures from their get-together 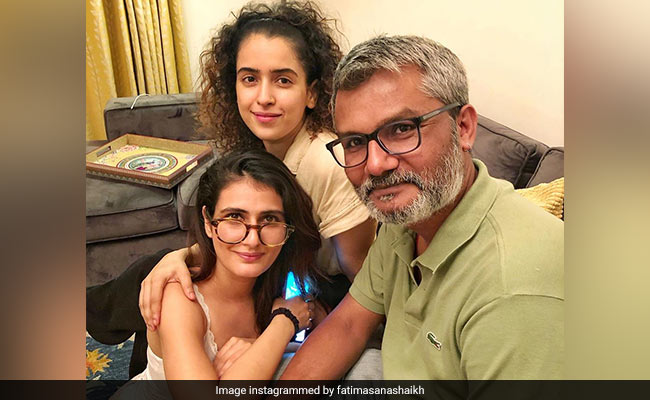 Fatima Sana Shaikh and Sanya Malhotra shared glimpses from their meeting with Dangal director Nitesh Tiwari and his filmmaker wife Ashwiny Iyer Tiwari on their respective Instagram profiles on Wednesday. Both the actresses made their Bollywood debuts with the 2016 super hit film Dangal, directed by Nitesh Tiwari. The film also starred Aamir Khan and Zaira Wasim. The film was based on the life of Mahavir Singh Phogat and his daughters Geeta Phogat and Babita Phogat. Sharing the pictures on her Instagram profile, Fatima Sana Shaikh, wrote: "Kyunki photo toh harr angle se leni hai."

In a separate post, Fatima borrowed a line from the film Dangal and she captioned it: "Maari chhoriya, chhichore se kam hai ke?" Sanya Malhotra also shared the same set of pictures on her Instagram profile. Check out the pictures from the get-together here:

Fatima and Sanya share a great rapport. The duo frequently make appearances on each other's Instagram profiles. Take a look at some of the pictures of the actresses together:

You are right, cutie @sanyamalhotra_ Break lena koi hamse seekhe!! What do you think of These?!

On the work front, Nitesh Tiwari recently directed the film Chhichhore, starring Sushant Singh Rajput and Shraddha Kapoor, which has collected over Rs 102 crore as of now.