Isn't It Romantic? Trailer: Priyanka Chopra Makes The Most Of Her Short Appearance, Rebel Wilson Is Outstanding

Isn't It Romantic? will be Priyanka Chopra's second Hollywood film after Baywatch 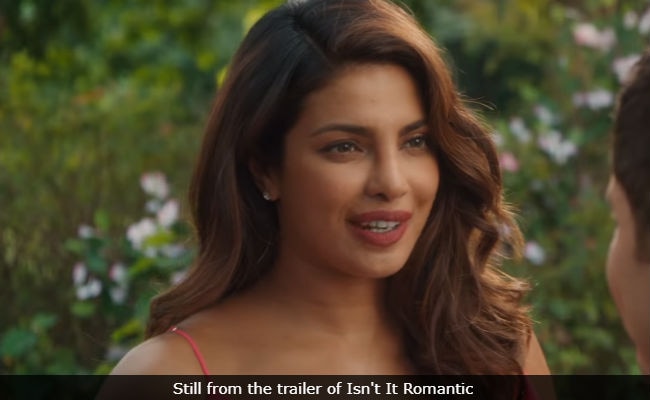 The first trailer of Isn't It Romantic? hit the Internet on Thursday and boy, 'Isn't It really cute?' Rebel Wilson is a sheer delight in Isn't It Romantic?, in which she plays the role of a 25-year-old architect named Natalie, who detests romantic comedy films. After a freak accident, she finds that her world has turned upside down and it has all things romantic. For example, she has a perfect apartment with a wardrobe to die for. Everything looks "jaisa filmo mein hota hain." Her 'horror' story can end only if (no points for guessing) she finds true love. For a moment, it appears that Natalie knows what has to be done but then enter Priyanka Chopra, who plays the role of Isabella, a yoga ambassador. Priyanka Chopra gets two scenes in the trailer, but she makes the most of it.

Watch the hilarious trailer of Isn't It Romantic?

Isn't It Romantic? is one of three international projects Priyanka Chopra had signed up for. The first was Baywatch, her Hollywood debut film, in which she played the antagonist opposite Dwayne Johnson. Her other film is A Kid Like Jake. Priyanka Chopra had reportedly been signed opposite Chris Pratt in Cowboy Ninja Viking but the film had been postponed indefinitely for now.

Meanwhile, some aspects of the film appear similar to 2018 film I Feel Pretty, which featured Amy Schumer in the lead role. Going by the trailer of Isn't It Romantic?, it appears that both films address similar themes of body-image issues on the surface.

Isn't It Romantic? also stars Liam Hemsworth and Adam DeVine. The film directed by Todd Strauss-Schulson is releasing in February 2019.