Is That Akshay Kumar Or Aarav In Twinkle Khanna's 'Upside Down' Pic?

"Sometimes you have to be upside down to see things the right-side up," tweeted Twinkle 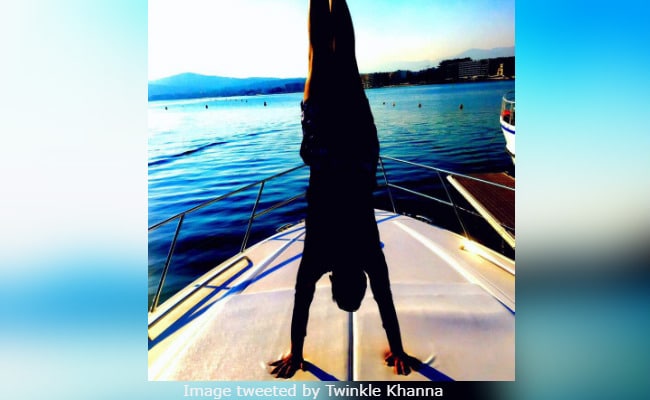 New Delhi: Twinkle Khanna has tweeted, again. The actress-turned-author has a family full of gymnastic enthusiasts, and she is making the best use of it on Twitter. Twinkle's husband, actor Akshay Kumar, is a martial arts expert and loves to do his own stunts in movies while her teenaged son Aarav often features in posts doing somersaults and the like. Hence, we are a little confused about the new photo Twinkle has shared. Is it Akshay Kumar or is it Aarav? The photo isn't random because it comes with an appropriate life lesson: "Sometimes you have to be upside down to see things the right-side up." Twinkle and Akshay are also parents to five-year-old daughter Nitara.

Sometimes you have to be upside down to see things the right-side up pic.twitter.com/x4jqU3Z7IN

Both Akshay and Aarav feature in Twinkle's social media entries, all of which are shared with captions signed off with Twinkle's signature humour. For one from a session of playing scrabble with Aarav, Twinkle wrote: "Trying to make a comeback after a humiliating defeat at the hands of my 14 year old," and she welcomed Aarav's 15th birthday with this wish: "Happy birthday my darling! May you always land firmly on your feet!"

Happy birthday my darling! May you always land firmly on your feet! #15thbirthdaypic.twitter.com/tGiZUle0pe

About the "well trained" boys at home, Twinkle shared a kitchen photo, writing: "Father and son busy making souffle and layered white chocolate mousse for our dinner guests. I have trained my boys well."

Promoted
Listen to the latest songs, only on JioSaavn.com
Twinkle Khanna is undoubtedly the boss of Twitter puns, one of her recent one being the Karva Chauth special tweet, in which she provided an alternate remedy to wives, who fast on the occasion to ensure long lives for their husbands.

Scientists studying longest living mammals,bowhead whales found for a long life what is needed is a slow metabolism & not wives who fast:)

Twinkle Khanna, also a columnist, is the author of two books - Mrs Funnybones (which also doubles up as the name of her social media handles) and The Legend of Lakshmi Prasad.