Irrfan Khan's Battle With A "Rare Disease," Documented In His Tweets

Here's a timeline of Irrfan's diagnosis, his treatment, his journey and subsequent comeback to Bollywood 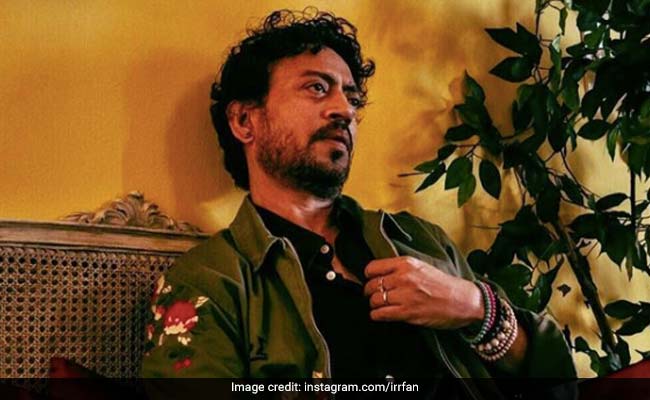 For Irrfan Khan, who died at the age of 53 in Mumbai's Kokilaben Dhirubhai Ambani Hospital on Wednesday, it had been a long and heroic battle against cancer, one that he documented on and off in social media posts that serve as reminders of the actor's grace and charisma. Mr Khan returned from London last September after surgery and treatment; this week, he was taken to hospital with a colon infection. He didn't make it. In his last post, a video message shared before his final film Angrezi Medium released last month, Irrfan Khan told his fans, "Today I am there with you as well as not there." He might well say the same today because, while he may not be with us he will never leave us.

Here's a timeline of Irrfan Khan's diagnosis, his treatment, his journey and subsequent comeback to Bollywood.

On March 5, 2018, the star shared a tweet, in which he revealed that he had been diagnosed with a "rare disease". Rumours about brain cancer had been already been in circulation and the actor asked his fans to put speculation at rest, saying that he would reveal details soon. He tweeted: "Sometimes you wake up with a jolt with life shaking you up. The last fifteen days, my life has been a suspense story. Little had I known that my search for rare stories would make me find a rare disease. I have never given up and have always fought for my choices and always will. My family and friends are with me and we are working it out the best way possible. In trying times, please don't speculate as I will myself share with you my story within a week - ten days, when the further investigations come with a conclusive diagnosis. Till then, wish the best for me.

Borrowing a quote from Margaret Mitchell, Irrfan Khan, on March 18, 2018, revealed that he had been diagnosed with an neuroendocrine tumour. He added, "Learning that I have been diagnosed with NeuroEndocrine Tumour as of now has now has admittedly been difficult, but the love and strength of those around me and that I found within me has brought me to a place of hope. The journey of this is taking me out of the country, and I request everyone to continue sending their wishes. As for the rumours that were floated NEURO is not always about the brain and googling is the easiest way to do research. To those who waited for my words, I hope to be back with more stories to tell."

The Life Of Pi actor summed up his then state of mind by quoting a few lines by wwartime poet Rainer Maria Rilke. "Let everything happen to you: beauty and terror. Just keep going. No feeling is final," read an excerpt from Irrfan Khan's post.

The actor left for surgery and treatment in London in 2018. After undergoing treatment there, Irrfan Khan returned to Mumbai briefly in April 2019. Meanwhile, in 2018, his film Karwaan, co-starring Dulquer Salmaan and Mithila Palkar, released in theatres. The Maqbool actor wasn't a part of the film's promotions as he was medically unfit. After returning to India, Irrfan Khan wrote on Twitter: "Maybe, somewhere in the pursuit of winning, we forget how much it means to be loved. In our vulnerability, we are reminded. As I leave my footprints onto these steps of my life, I want to pause to be grateful for receiving your immense love and support, it soothed me in my process of healing. So I travel back to you, thanking you from the bottom of my heart."

Ahead of his last film Angrezi Medium's release in March this year, Irrfan Khan shared an audio-visual note. Sharing the not on Twitter, he wrote, "As we embark on the journey to release Angrezi Medium, here's a small note for you." The video had stills from the Homi Adajania-directed film along with a voice over from Irrfan Khan. He said, "Hello, brothers and sisters. I am with you and not with you. Today I am there with you as well as not there. My film Angrezi Medium is extremely special to me. I genuinely wanted to promote this film with as much love as we have made it with. But there are some unwanted guests sitting inside my body and I am having a conversation with them. Whatever their status is, I will keep you posted. There is a saying, when life gives you lemons, you make a lemonade."

As we embark on the journey to release #AngreziMedium, here's a small note for you allhttps://t.co/Sr0Pp1x3dv#AngreziMedium trailer out tomorrow!

Irrfan Khan's mother Saeeda Begum died at the age of 95 on Saturday morning in Jaipur. According to news agency ANI, Irrfan paid his last respects to his late mother through a video conferencing session.

Irrfan Khan leaves behind a legacy of great films like Maqbool, Haasil, Paan Singh Tomar, Haider, Pinku, Talvar and Qissa. He was also a part of international projects like The Namesake, Life Of Pi, Inferno, Slumdog Millionaire and The Warrior, among others. Irrfan Khan is survived by his wife Sutapa and sons Babil and Ayan.