Irrfan Khan was "the brightest, most genuine, humble, kind and eventually the bravest soul," wrote his Jazbaa co-star Aishwarya Rai Bachchan in an Instagram story after the actor died in a Mumbai hospital on Wednesday. Mr Khan, who was 53, waged a year-and-a-half long battle against cancer. He was taken to hospital with a colon infection this week. To Aishwarya, as to many other co-stars, the much-admired Irrfan Khan was more than a colleague - he was "dear friend." Aishwarya Rai Bachchan also sent "Much love and strength" to the actor's wife Sutapa Sikdar and sons Ayab and Babil. Read her post here: 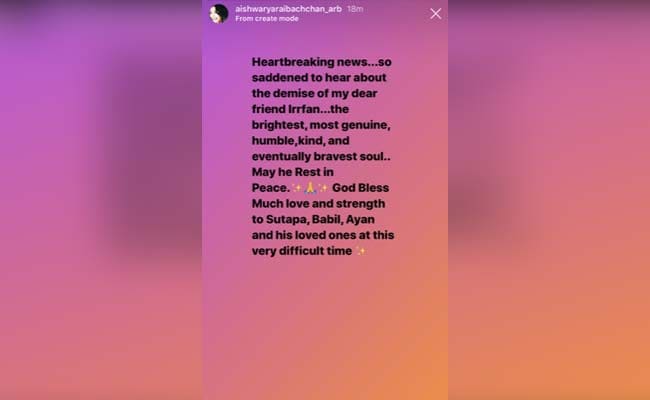 Screenshot of the Instagram story posted by Aishwarya Rai Bachchan.

Jazbaa, released in 2015, was Aishwarya Rai Bachchan's comeback project, ending the five-year break she took after her pregnancy and the birth of her daughter Aaradhya in 2011. Directed by Sanjay Gupta, the thriller starred Aishwarya as a lawyer whose daughter is kidnapped and Irrfan Khan as a maverick police officer.

Aishwarya's father-in-law, Amitabh Bachchan also shared a tribute for Irrfan Khan, with whom he co-starred in the 2015 film Piku. Big B described Mr Khan as "an incredible talent, a gracious colleague."

Irrfan Khan "was an actor for whom I had great admiration," wrote Aishwarya's husband, Abhishek Bachchan.

Very sad to hear of Irrfan's passing. An immense talent! An actor for whom I had great admiration. My condolences to the family. Rest in Glory!

Irrfan Khan's last rites were held in Mumbai on Wednesday afternoon. Some of his directors - Vishal Bhardwaj, Tigmanshu Dhulia and Abhinay Deo - braved the Mumbai lockdown to pay their last respects to the actor at the hospital he died in. Irrfan Khan, star of acclaimed films such as The Lunchbox, Life Of Pi, The Namesake, Talvar, Maqbool and Haider, was diagnosed with a cancerous tumour in March 2018. He spent most of the next year-and-a-half in London, where received surgery and treatment. Mr Khan flew home last September. His last film was Angrezi Medium, which released just weeks before he died.