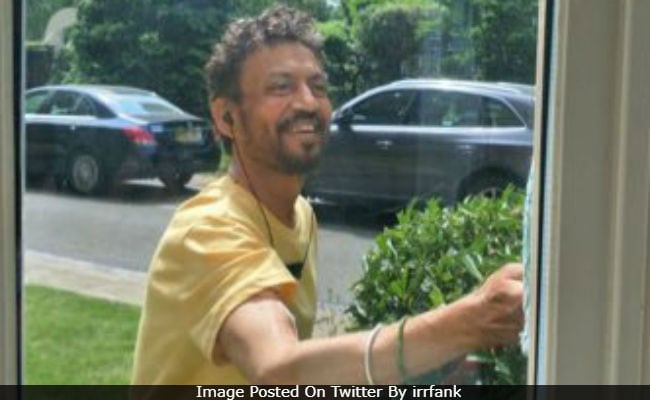 Irrfan Khan has updated Twitter with this picture of himself (Image courtesy: irrfank)

Irrfan Khan, battling neuroendocrine tumour, briefly made an appearance on Twitter on Sunday afternoon to change his profile picture and within a few hours, it went viral. It is a picture of Irrfan Khan, wearing a yellow T-shirt, and he has been photographed through a glass window with earphones around his neck and a million dollar smile on his face. Twitter believes that the picture has been taken in London, where the 51-year-old actor is undergoing a treatment. Meawhile, Irrfan Khan is also using Twitter to promote his forthcoming film Karwaan, which also stars Malyalam actor Dulquer Salmaan and Mithila Palkar. Last month, Irrfan Khan won the IIFA for Best Actor for his role in Hindi Medium. His trophy was handed over to the team on his behalf. However, he thanked IIFA on Twitter and wrote, "Thank you to IIFA and our audience who have been part for my journey."

In an interview to Bombay Times in June, Irrfan opened up about battling the tumour and stated about the 'terrifying hospital visits.' "It's been quite some time now since I have been diagnosed with a high-grade neuroendocrine cancer. This new name in my vocabulary, I got to know, was rare, and due to fewer study cases, and less information comparatively, the unpredictability of the treatment was more. I was part of a trial-and-error game," he told Bombay Times.

At the same time, a SpotboyE reported that Shah Rukh Khan had handed over the keys to his London apartment to Irrfan and him wife Sutapa. "SRK wanted Irrfan and family to feel at home while in London and help out a friend in need," the report stated.