Ira Khan Asks Boyfriend Nupur Shikhare To Be Her "Playmate." His Reply

"Life's a playground. Will you be my playmate?" wrote Ira Khan 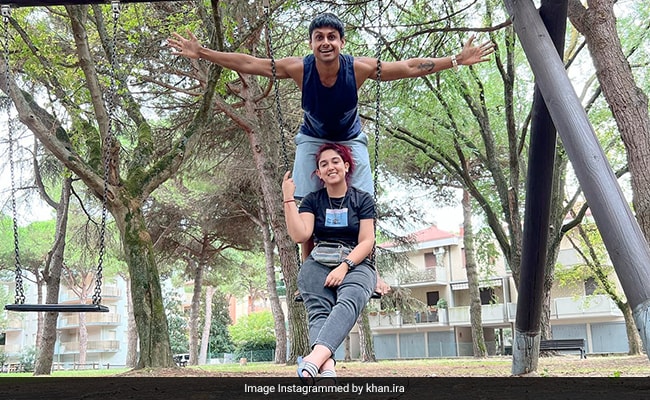 Ira Khan has treated her Insta family to new pictures of her with boyfriend Nupur Shikhare. In the images, the couple can be seen spending quality time in a park. In the first image, Ira happily poses for the camera while Nupur looks at her adorably. In the second image, both can be seen on the same swing posing for the camera. In the caption, Ira asked her boyfriend Nupur, "Life's a playground. Will you be my playmate?" To this, he replied, "Always," followed by a heart and kiss emoticon.

Ira Khan, who is the daughter of Aamir Khan from his first wife Reena Dutt, often shares pictures with her boyfriend, Nupur Shikhare. A few weeks ago, she shared uber-cool photos of Nupur and wrote, "OOK, ITS MY CUTIE! He makes my heart full".

Ira Khan attended the special screening of father Aamir Khan's movie Laal Singh Chaddha with her boyfriend. Sharing the pictures, she wrote a long note that read, "So many social occasions in such a short time span. This reminds me of a sticker from my sticker book (I never thought I'd get to use it truthfully) - STRESSED, DEPRESSED BUT WELL-DRESSED. I'm exhausted. Pooped. Completely. But I think I did well and I definitely over-extended myself but I had fun in parts and I was mostly making an informed decision to over-extend. But regardless of all that... we all looked great! And that, I've only recently learnt, counts for something (something beyond the superficial)."

Ira Khan has been vocal about her mental health and often shares posts on how to overcome anxiety. A few days ago, Ira dedicated her post to people who have been feeling suicidal or suffering from depression on the occasion of World Suicide Prevention Day. In the captions, she wrote, "RIGGER WARNING: Suicide, depression To anyone feeling suicidal or contemplating suicide. Also, if I've over-stepped, my apologies. It was not my intention."

Meanwhile, on the work front, Ira Khan made her directorial debut in 2019 with a theatrical adaptation of Euripides' Medea.

Actor Vikram Gokhale Dies: 5 Films To Remember Him By