Into The Wild: Alia Bhatt Shares Memories From Her 'Beautiful' African Safari

Alia Bhatt's vlog entry will make you green with envy 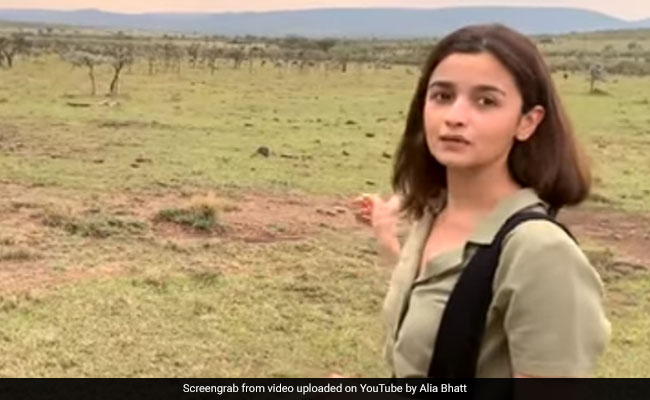 Alia Bhatt in a still from the video. (Image courtesy: YouTube)

Alia Bhatt added another video to her blog entry. This one is slightly different from the videos that she usually posts. The 26-year-old actress gave her fans a sneak peek into her "beautiful" African safari. In the video, Alia can be seen enjoying the local cuisine, interacting with the locals and what not. In the beginning of the video, Alia revealed that initially she was slightly apprehensive about sharing the video because she wanted to stay away from any sort of technology. However, she could not help but resit sharing the video with her fans. Alia signed off the video with a special advice. She said, "Even if you spot a lion or a buffalo, just try to stand completely still, they'll walk away. If you run, they'll chase you."

On Thursday, Alia Bhatt shared a stunning picture of herself on her Instagram profile. In the close-up shot, she could be seen wearing a hat. She accompanied the post with a caption that read, "Welcome to the jungle. New vlog on my beautiful African Safari now up."

Welcome to the jungle New vlog on my beautiful African Safari now up.. Link in bio

A few days ago, Alia Bhatt shared a stunning picture from the safari, in which she could be seen dressed in a playsuit. She captioned the post: "Let's wander where the Wi-Fi is weak." ICYMI, this is what we are talking about: