Alia Bhatt 'Wanders Where The Wi-Fi Is Weak' In Kenya. See Vacation Pics 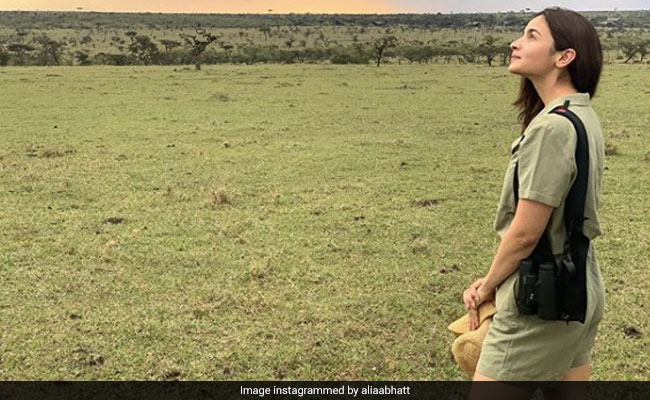 Our Sunday couldn't get any better as we chanced upon some really amazing pictures of Alia Bhatt from her Kenya vacation. A couple of days ago, pictures of Alia Bhatt and Ranbir Kapoor surfaced on the Internet, in which the duo could be seen enjoying Safari ride in Kenya. Now, the 26-year-old actress shared multiple photos of herself from the getaway, in which she can be seen enjoying the picturesque view of the wildlife at the Masai Mara National Reserve in an olive green shirt and shorts, which she paired with a camera bag and a hat. It wouldn't be wrong to say that Alia's no-makeup look is winning hearts on the Internet.

Sharing the picture, Alia Bhatt wrote: "Let's wander where the Wi-Fi is weak." The oh-so-adorable photo is stealing the show on social media as it received over one million likes in few hours. Check it out:

Reacting to the picture, several celebrities including Diana Penty and Sophie Choudry appreciated the beauty of the photo in the comments section. "Lovely," wrote Diana Penty while Sophie commented: "Beautiful."

In a separate post, Alia Bhatt shared a selfie and wrote: "Sun-blushed/burnt." Actresses such as Esha Gupta and Jacqueline Fernandez dropped adorable heart emojis in the comments section for Alia.

On Friday, Alia Bhatt shared the first picture from her vacation, in which she could be seen admiring the sunset. She captioned the postcard-worthy photo: "Morning is here, the day is new, perhaps this is where the light breaks through." Take a look:

And now, here's the aforementioned picture of Alia Bhatt and Ranbir Kapoor, which went viral quickly after it was originally shared by a photographer on social media. Alia and Ranbir have been dating for almost a year now.

Thank you Rabeeca Hameed our follower from Kenya for this cool capture of love birds #aliabhatt #ranbirkapoor . I'm sure we will get too see what Alia captured on her Instagram. #viralbhayani @viralbhayani

Alia Bhatt and Ranbir Kapoor will next be seen together in Ayan Mukerji's Brahmastra, which also stars Amitabh Bachchan.