Into The Blue: Ileana D'Cruz's Pic Is What Dreams Are Made Of 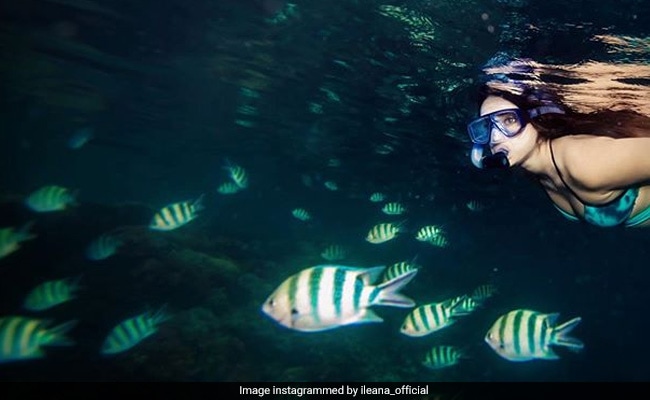 If we had to sum up Barfi! actress Ileana D'Cruz's latest Instagram post in a word, we would call it dreamy. The actress posted a stunning underwater picture on her Instagram profile on Thursday and it has our heart. Dressed in blue swimwear, Ileana can be seen swimming with a few fish. No captions needed. Just like us, the actress' Instafam also loved the picture and flooded the comments section of her post with heart and fire emoticons.

Water baby Ileana  misses the pool and her Instagram posts clearly reflect that. On Wednesday, she shared a picture of herself, dressed in a bikini and she wrote: "Throwback to when pool days and getting gloriously toasted in the sun was no big deal." She added the hashtags, #goodtimes, #normalcy and #fingerscrossed.

Me avoiding people. - - - - - [Can't remember if you took this photo @bhushanbagadiapositives

The actress will next be seen in The Big Bull, co-starring Abhishek Bachchan. The film will be directed by filmmaker Kookie Gulati and it will be produced by Ajay Devgn. The Big Bull will release on OTT platform Disney+Hotstar.