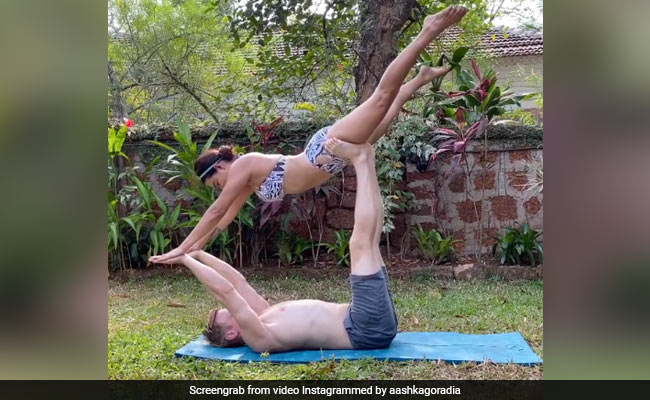 TV actress Aashka Goradia's yoga session with husband Brent Goble is making us look bad. The couple, for International Yoga Day, shared a snippet of their couple yoga sessions and it is making her Instafam swoon. In the video, Brent and Aashka can be seen painting Instagram red with their intense yoga work-out. Aashka shared the video on her Instagram profile and captioned it with the hashtag #flyon. She also tagged her husband Brent Goble in her post. Take a look:

Within minutes of posting, Aashka's video was flooded with comments from her friends and fans. Reacting to the video, Mouni Roy commented, "babies doing jhula," while Sana Khan wrote, "Amazing Ashu." Brent Goble commented to the video saying, "coming soon," to which Aashka replied saying, "Yes."

Aashka Goradia keeps treating her Instafam to amazing snippets of her yoga sessions. A few days back, Aashka shared a set of pictures where she can be seen doing Pincha Mayurasana - a yoga pose also known as feathered peacock pose. She captioned the picture with a quote attributed to Jiddu K - "It is no measure of health to be well adjusted to a profoundly sick society."

It is no measure of health to be well adjusted to a profoundly sick society. Jiddu K . . . #pinchamayurasana #pincha #pinchapractice #yogaeveryday #yogainspiration #hatha #ashtanga #peaceofblueyoga

Here's another video of Aashka Goradia doing a yoga pose:

Aashka got married to Brent Goble in December 2017. They had a church wedding which was followed by a Hindu ceremony.