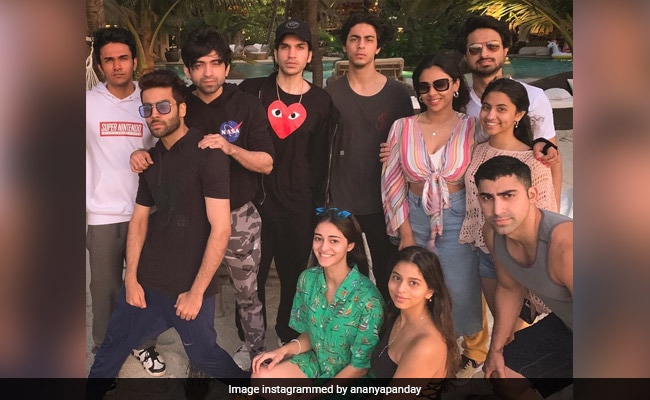 Guess where Bollywood's gen-next is partying this New Year holiday? At Shah Rukh Khan's Alibaug home. Actress Ananya Panday just shared a glimpse of her Alibaug getaway on Instagram with a potentially-viral Instagram photo, featuring her best friend - Shah Rukh Khan's daughter Suhana Khan - her brother Aryan Khan, their cousins Alia and Arjun Chhiba (children of Gauri's brother Vikrant Chhiba) and other friends. "New year, no new friends," Ananya captioned the photo, in which she poses with bestie Suhana Khan at what appears to be a beach-like pool setting. Alia Chhiba smiles ear-to-ear in the photo while Aryan sports his signature straight-face.

Here's how Suhana and Ananya got the New Year party started:

Meanwhile, glimpses of Suhana's New Year celebrations at the Alibaug home have also been curated by fan-clubs from Alia Chhiba's Instagram story. Suhana and Aryan's six-year-old brother AbRam was also spotted. On Sunday, Suhana Khan was spotted taking the ferry from Mumbai to Alibaug.

TBH, these inside photos of Shah Rukh Khan's Alibaug home indeed remind us of the superstar's birthday celebrations in 2017, which was attended by from guests ranging from Deepika Padukone, Alia Bhatt, Katrina Kaif and Karan Johar to Suhana's besties Ananya and Shanaya Kapoor.

On the work front, Ananya Panday made her Bollywood debut with Student Of The Year 2 and has also already starred in Pati Patni Aur Woh. Suhana Khan, who is pursuing film studies at New York University, made her acting debut with a college short film titled The Grey Part Of Blue. In between school and NYU, Suhana went to England's Ardingly College. Suhana has also made her magazine cover debut for Vogue last year.