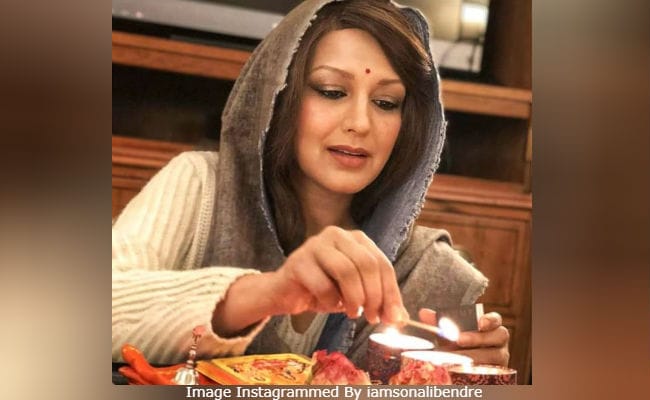 Sonali Bendre's husband Goldie Behl and their son Ranveer joined the actress in New York to celebrate Diwali together. Sonali, who is undergoing cancer treatment there, shared a set of pictures from their 'unconventional' Diwali and posted details about the way they celebrated the festival. "It was quite an unconventional one. We didn't have Indian clothes, had a small puja, but it was all heart," she wrote. In the pictures, we see the family praying to Lord Ganesha and Goddess Lakshmi idols. For the prasad, they offered a bowl of gulab jamun and dry fruits. Inside Sonali Bendre and Goldie Behl's Diwali In New York.

Diwali in New York happens much later than in Mumbai... Hence the late wish! It was quite an unconventional one... We didn't have Indian clothes, we had a small puja... But it was all heart. Happy Diwali everyone! May this year bring you good health, wealth and prosperity... Hope you celebrated this festival with your family and friends, and hope you cherish every moment of happiness with them!

Sonali Bendre was diagnosed with cancer in July and since then she has been in New York for the treatment. She has chronicled her fight with cancer with some inspiring posts on Instagram. She has also written about her high and low moments while battling cancer.

From the moment he was born 12 years, 11 months and 8 days ago, my amazing @rockbehl took ownership of my heart. From then on, his happiness and wellbeing have been the centre of anything @goldiebehl and I ever did. And so, when the Big C reared its ugly head, our biggest dilemma was what and how we were going to tell him. As much as we wanted to protect him, we knew it was important to tell him the full facts. We've always been open and honest with him and this time it wasn't going to be different. He took the news so maturely... and instantly became a source of strength and positivity for me. In some situations now, he even reverses roles and takes on being the parent, reminding me of things I need to do! I believe that it's imperative to keep kids involved in a situation like this. They are a lot more resilient than we give them credit for. It's important to spend time with them and include them, rather than make them wait on the side-lines, not being told yet instinctively knowing everything. In our effort to protect them from the pain and realities of life, we might end up doing the opposite. I'm spending time with Ranveer right now, while he's on summer vacation. His madness and shenanigans help me #SwitchOnTheSunshine. And today, we derive strength from each other #OneDayAtATime

She is also keeping her book club up and running. Sonali Bendre started a digital book club on Facebook last year. After she moved to the US, her friends Dia Mirza, Sussanne Khan and Gayatri Joshi took over the club for her. In August, they organised for a conversation as part of Sonali's Book Club, which was also live streamed on her Facebook profile.

Time to announce the next book! The last one took a while, as my eyesight was doing strange things due to the chemo and I couldn't read for a while. Was panicking a bit, but now all is well again! Whew! The next book for SBC is set in the city I'm currently in, New York... it's called A Little Life by @hanyayanagihara. It's been nominated for so many literary awards and is a story of friendship and ambition. We've read books with female friendships before, but this is our first one on friendship among boys... Should be interesting. Can't wait to start reading it, and I hope you read it with me too. #SBCBookDiscussion #SBC #SonalisBookClub

When in New York, Sonali also caught up with actor Rishi Kapoor, who is also in the US for medical treatment. She also met Priyanka Chopra and attended her bridal shower, along with Neetu Kapoor, Rishi Kapoor's wife.