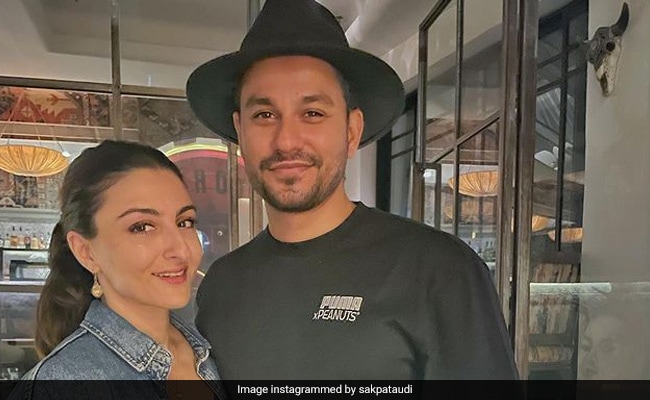 Soha Ali Khan went on a date with husband Kunal Kemmu after he returned from his Ladakh vacation. The actress, on Tuesday, posted a set of pictures of herself and Kunal Kemmu from Mumbai's Tori Restaurant and wrote: "Date night with Kunal Kemmu! And what better place than Tori with its delicious new menu!" Soha Ali Khan can be seen sporting a black tee and a denim jacket in the pictures while Kunal Kemmu looks cool in a black t-shirt and a matching hat. One of the pictures also features their friends. Fans of the couple flooded Soha's post with comments like "You both look so adorable together" and "most beautiful couple."

Soha Ali Khan and Kunal Kemmu's love story is nothing less than a fairy tale. They first met on the sets of their 2009 film Dhoondte Reh Jaaoge. After dating for a few years, Kunal proposed to Soha Ali Khan in Paris. The couple got married in a private ceremony on January 25 in 2015 and in 2017, they welcomed their first child Inaaya Naumi Kemmu.

Kunal Kemmu was enjoying a road trip with his friends in Ladakh a few days ago. He even shared videos from his trip on his Instagram profile. Take a look:

In terms of work, Soha Ali Khan made her debut in Bollywood with Dil Maange More in 2004. Since then, she has featured in films such as Pyaar Mein Twist, Rang De Basanti, Khoya Khoya Chand, Mumbai Meri Jaan, Dhoondte Reh Jaaoge, Tum Mile, Tera Kya Hoga Johnny and Ghayal: Once Again. The actress was last seen in Saheb, Biwi Aur Gangster 3.