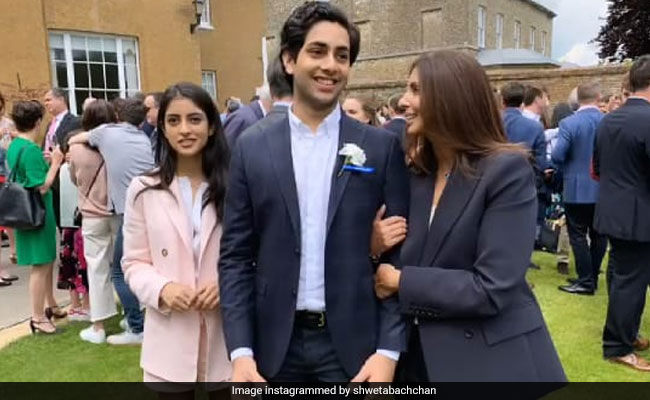 Shweta Bachchan Nanda's excitement spilled over to Instagram as she filled up her album with photos from son Agastya's graduation. Shweta's daughter Navya Naveli Nanda also joined the cheer-squad, sharing a post of her own, but first, she featured in adorable photos on Shweta's Instagram from Agastya's graduation ceremony at Sevenoaks School in Kent, London. "In the blink of an eye - congratulations Gus you made it," wrote Shweta and added: "Journey wisely" in the caption to another post. But being a mom, that's not enough, so she shared a lucky four-leafed clover emoji with Agastya and wrote: "One more for luck." In the pictures, Navya and Agastya pose together - Navya is cute as ever in peach separates while Agastya is suited in blue.

One more for luck

In the blink of an eye - congratulations Gus you made it

Meanwhile, Agastya's big day also made Abhishek a "proud mamu", who Instagrammed: "Congratulations on your graduation Agastya. You're growing up too fast and way too tall." On Abhishek's Instagram, congratulatory messages for Agastya also poured in from the actor's colleague Hrithik Roshan and brother-in-law Kunal Kapoor (married to Abhishek's cousin Naina Bachchan).

Congratulations on your graduation Agastya. You're growing up too fast and way too tall!! #ProudMamu

Navya Naveli and Shah Rukh Khan's son were also classmates at Sevenoaks School and their batch graduated in 2016, when the Bachchans and the Khans were spotted celebrating in London. Navya is reportedly pursuing higher studies at New York's Fordham University while Aryan is studying films at University of Southern California.

Shweta Bachchan Nanda made her debut as an author with fictional novel Paradise Towers last year. Shweta recently launched a fashion label named MxS in collaboration with designer Monisha Jaising. Shweta has been married to Delhi-based business Nikhil Nanda since 1997.