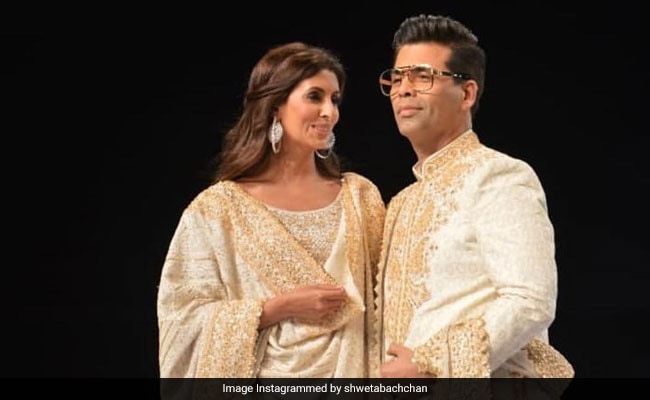 Shweta Bachchan Nanda and Karan Johar go a long way - they are childhood friends and recently walked the ramp together for designer duo Abu Jani-Sandeep Khosla's new show. Because fashion posts are passe, Shweta decided to hilariously caption a photo of herself and KJo from the show. "Wolves in chic clothing," she wrote, tweaking the original saying: "wolf in sheep's clothing," which suggests that the subject's personality is contrary to the appearance. LOL. In the photo, Shweta Bachchan Nanda and Karan Johar are colour coordinated in signature while Abu Jabi-Sandeep Khosla ensembles. Abu Jani and Sandeep Khosla's show a tribute to the textiles and embroideries of India and also a contributory effort to help Cancer Patients Aid Association (CPAA).

Looks like Shweta's megastar father Amitabh Bachchan saw his daughter very differently. Instagramming a photo from the event, he wrote: "To the best... always... tonight elegance grace and dignity." In viral videos on social media, Big B was also spotted whistling to a videographer to not obstruct his filming on his daughter on stage.

To the best .. always .. tonight elegance grace and dignity

Apart from Shweta and Karan, Sonam Kapoor was also showstopper for the night.

Last night, we walked down the ramp with something bigger than fashion in mind. We walked for hope, strength, perseverance and love. Thank you @abujanisandeepkhosla and @cpaaindia for putting this fabulous night together. Make up :@artinayar Hair: @bbhiral : @thehouseofpixels @riidawg #cpaaindia #abujanisandeepkhosla #fashionforacause #inheritance

Flanked by the best boys!!