Nothing To See Here, Just Another Pic Of Navya Naveli Shared By Shweta Bachchan Nanda 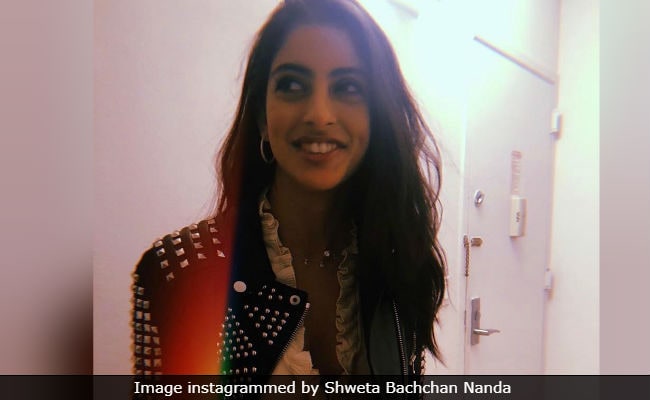 Shweta Bachchan Nanda shared a fabulous picture of her daughter Navya Naveli Nanda on Instagram. Navya, dressed in a ruffle-collar shirt with an embellished jacket, is all smiles in the picture, which Shweta captioned "Sprezzatura." In colloquial fashion vocabulary, 'sprezzatura' means 'seemingly effortless style' and we think Navya has aced it. For Navya, being stylish comes almost naturally, courtesy her mother Shweta. Shweta, the elder of Amitabh Bachchan and Jaya Bachchan's two children, debuted as a designer last year in collaboration with Monisha Jaising. At that time, she had picked Navya the muse for the photoshoot of her collection.

Recently, when Shweta appeared on talk show Koffee With Karan 6, she confessed she had played an instrumental role in steering Navya away from Bollywood. Shweta accepted that she "drilled it" in Navya's head that the film industry is a "dark, strange and unstable place." She said: "I think I was excessive (in my analysis). I think I was unfair. I think, I only thought selfishly." She also said: "I don't know what Navya's talent is. I feel, unless she's completely driven, passionate and talented, she has no business being here. Just because she's related to some famous people doesn't mean she has what it takes."

Shweta Bachchan Nanda is married to businessman Nikhil Nanda and they are also parents to 18-year-old Agastya. Shweta is also the author of Paradise Towers.