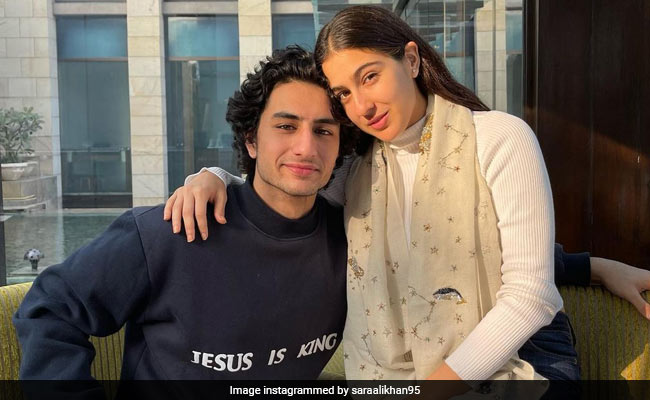 Sara Ali Khan rang in the New Year with brother Ibrahim Ali Khan and a couple of her friends, glimpses of which she shared on her social media profile on Saturday. Sara, who was last seen in recently released film Coolie No 1, posted a set of pictures of herself, Ibrahim, her friend Orhan Awatramani and Sara Vaisoha making beautiful memories together. In the pictures, Sara Ali Khan can be seen dressed in a white t-shirt and denims, which she paired with a scarf. Ibrahim looks cool in a blue sweatshirt. Sharing the pictures, Sara wrote: "Sun sun sunshine. Hugs and cuddles since they're all mine. Jokes and pranks continue as we dine. If this is how 2021 is gonna be - it's a good sign."

A day before Saturday, Sara Ali Khan gave glimpses of her New Year's celebrations like this:

In his review for NDTV, film critic Saibal Chatterjee gave Coolie No 1 one star out of five and wrote: "It definitely has more colour and slickness, but all its gloss is strictly superficial. The new version is flashier and louder. The hope clearly is to paper over - and drown out - the sheer pointlessness of the exercise. But no matter what the director and his son, lead actor Varun Dhawan, try, this coolie is anything but numero uno. The 2020 Coolie No 1, released on Amazon Prime Video, is no patch on the 1995 Coolie No 1."