Inside Salman Khan's Fam-Jam With Salim Khan And Others. See Pic

Posing with Salman Khan in the photos are the actor's brothers Sohail, Arbaaz and their sons 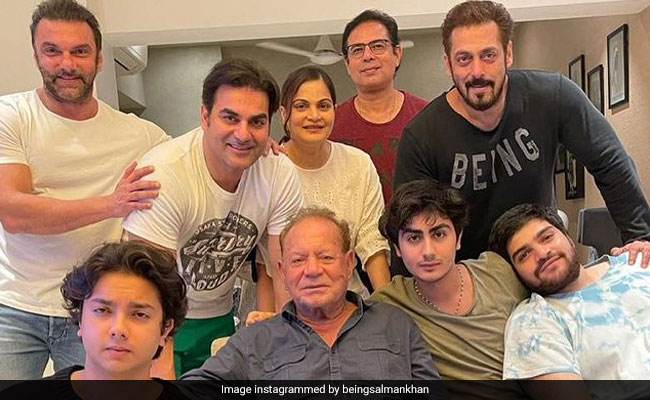 Father's Day was a reason for the members of the Khan family to unite and pose for one perfect family album. Salman Khan, as a Father's Day greeting for dad Salim Khan, shared family photos on his Instagram profile. "Happy Father's Day," read Salman Khan's caption. In the first picture, the actor can be seen posing with his siblings Sohail Khan, Arbaaz Khan and sister Alvira Khan Agnihotri. Arpita Khan Sharma is missing from the frame. In the second picture, posing with Salman Khan in the photos are Sohail Khan's son Nirvaan, Arbaaz's son Arhaan. Atul Agnihotri's son Ayaan also features in the photo. The second photo also features Alvira's husband and actor Atul Agnihotri. Later, Arbaaz Khan shared the same picture on his Instagram profile.

Last year, Salman Khan spent the lockdown period at his Panvel farmhouse, where he was staying from before the country went into lockdown mode in March 2020. For a few months, Salman was joined by his family members and friends, including Jacqueline Fernandez and Daisy Shah in Panvel.

Janhvi Kapoor Made This Viral Meme Template Her Own. See ROFL Post