Riya Sen married Shivam Tewari in Pune in the presence of sister Raima, mother Moon Moon Sen and others 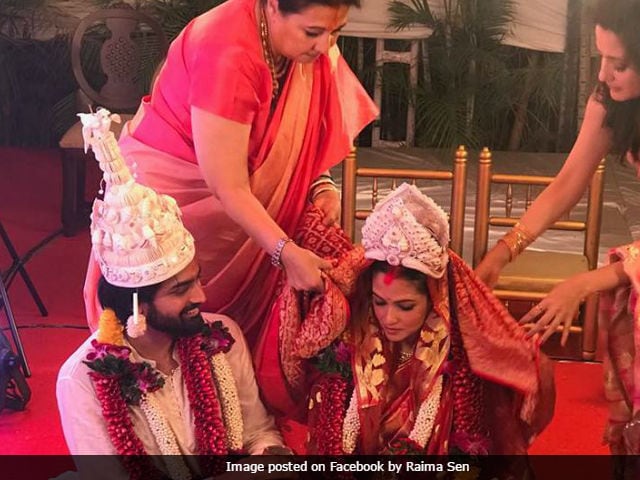 New Delhi: Pictures of Riya Sen's wedding have been posted online, confirming the reports that the 36-year-old actress married long-time boyfriend Shivam Tewari in Pune earlier this week, likely Wednesday. Riya's sister Raima has shared some photos from the wedding album which show that the newlyweds married in traditional Bengali style - a combined haldi ceremony was held for the bride and groom (with everyone in cheery yellow); Riya, resplendent in red, and Shivam wore the mukut and topor, the headgear worn in Bengali weddings; one picture shows Riya being carried by her brothers/male friends to the 'shubho drishti' ceremony, her face covered with paan leaves. Only immediate family and very close friends were invited: apart from Raima, who is Riya's older sister, the wedding group includes their parents - actress Moon Moon Sen and Bharat Dev Varma.

Here are pictures from Riya Sen's and Shivam Tewari's wedding.

Little is known about Riya's husband Shivam, who describes himself as a photography enthusiast on Instagram. The couple recently went on vacation to Slovakia and shared plenty pictures from the trip.

Only recently, Moon Moon Sen told Times Of India that her daughters are 'high-maintenance' and that "Money is not important for them as they don't realize its value."