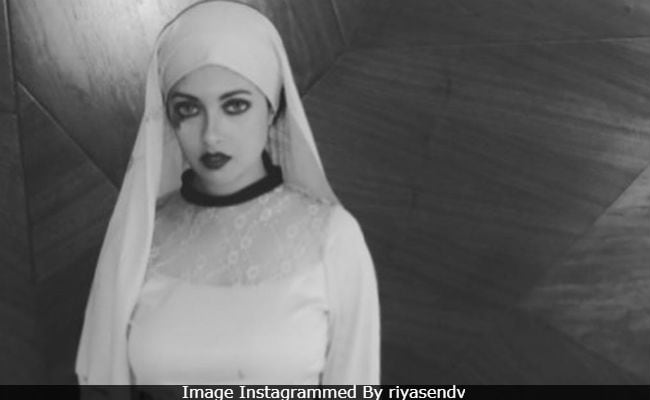 Riya Sen's latest Instagram posts will scare the heck out of you. Yes, indeed. The actress shared multiple pictures from her Halloween party in London and she describes it as 'haunting.' This Halloween, Riya opted for an outfit inspired from the latest horror film The Nun and the party appears to be hosted by some of her friends. "A haunting Halloween with hosts that made it oh so wicked and truly unforgettable," Riya captioned one of her posts, adding the hashtags like 'Witches,' 'Nuns,' 'Zombies' and 'Halloween Special.' She was accom Riyapanied by her husband Shivam Tewari, who perfectly complemented Riya according to the theme.

If I want it , it's already mine ...#TheNun #haunted #London #halloween #stayNatural ..

A haunting Halloween with hosts that made it o so wicked and truly unforgettable ! #Witches #Nuns #zombies and #Fun #HalloweenSpecial #London #AboutLastNight

A week ago, Riya shared a still from her latest short film That Night At A Mortuary and wrote that it will "spook you out this Halloween."

Check out the trailer of my latest short film "That Night At A Mortuary" we are sure this film will spook you out this #halloween #theshortcuts #KARAStudios .. hit the link in my bio for the trailer ..

Riya Sen is the younger daughter of actress Moon Moon Sen. Her elder sister Raima is also an actress.

She married her longtime boyfriend Shivam Tewari last year in a simple traditional Bengali wedding, hosted at a temple. Pictures from the wedding and eremonies were shared by Riya's sister Raima Sen.

Riya Sen's Instagram is a goldmine of some fabulous pictures from her vacations.

Heat in the seat & Thé Gondogol in d gondola (trying real hard from keeping those eyelids from drooping).. #Venice #GondolaRide #BestFunEver #summerLovers not ..

Riya Sen is best-known for roles in films such as Jhankar Beats, Apna Sapna Money Money, Shaadi No. 1 and Style. She also appeared in several regional films, including Bengali. She was last seen in Ekta Kapoor's web-series Ragini MMS Returns.