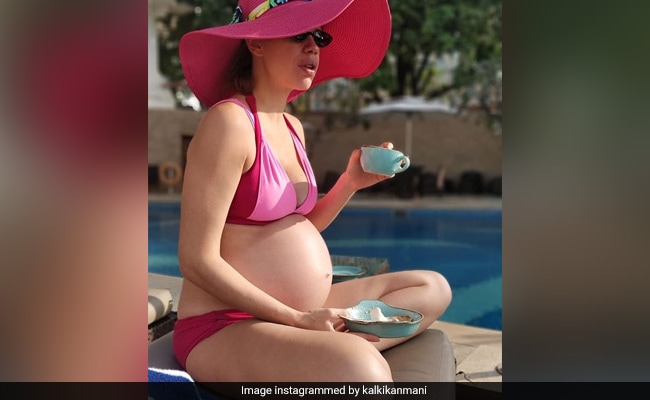 Actress Kalki Koechlin, who is in her final trimester, went sun-bathing and had a mini photoshoot of sorts, courtesy her A Death In The Gunj co-star Tilottama Shome. Kalki picked out a few of her sun-soaked photos and shared them on Instagram, describing her pregnancy glow in one word: "Blushing." Aww! Kalki also attached an interesting caption, as she wrote: "Gotta thank Tilottama Shome for the photo, Mezzaluna for the bikini, Angelina Joseph for the hat and Guy Hershberg for the love." Dedicating a note to the New Year, Kalki added: "Also grateful to all my friends and fam for the support, for the kindness of strangers, for the energy bubble around me, for the hope of renewed innocence, empathy and change in 2020." Kalki Koechlin is expecting her first child with pianist partner Guy Hershberg.

In the photos, Kalki Koechlin's pink bikini shows her gorgeous baby bump. Take a look at her post here:

*Blushing* Gotta thank @tillotamashome for the @mezzalunafashions for the @angelinajoseph for the @guyhershberg for the Also grateful to all my friends and fam for the support, for the kindness of strangers, for the energy bubble around me, for the hope of renewed innocence, empathy and change in 2020.

Kalki Koechlin opened up about her "rollercoaster" pregnancy ride in a BBC podcast titled Kalki In Parentland.

What a rollercoaster this pregnancy has been! Listen to this week's podcast where I talk to Mercy, host of Parentland, on #myindianlife about it all. Link in bio. #kalkipresentsmyindianlife #parentland #podcast @bbcworldservice

She also often drops boyfriend appreciation post for Guy Hershberg, in which she wrote: "He still lets me sit on his lap." Kalki's post came with an adorable photo of hers actually sitting on her favourite lap in the world.

Earlier in November, Kalki had shared a powerful and graphic representation of her journey through pregnancy in an Instagram post.

I know pregnancy is a celebration of life, and we pregnant women are meant to be grateful and sensitive and glowing throughout, and mostly I've had a healthy, safe and wonderful journey so far, but it is by far not an easy ride, it is not all butterflies and unicorns, and many days are so tough I want to crawl into bed and disappear. So I made this poster based on some of my diary notes of the last 8 months just so the non pregnant people can get a glimpse into what we are going through and may be curious enough to research further and be better prepared to help someone who is carrying. Roughly: The pink is the first trimester The white is the second The red is the third The boxes are the physical symptoms The bubbles around are my feelings and thoughts at that moment

Kalki Koechlin, who continued to work during few months into her pregnancy, has a new Netflix project lined up. On the work front this year, she famously featured in web-series Made in Heaven and Netflix series Sacred Games 2 last year.