Nia was surprised with a lot of cakes on her birthday and looked elated in the picture, shared by her 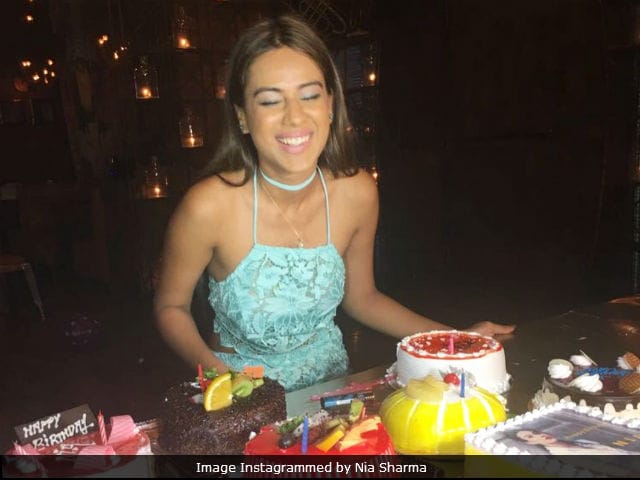 New Delhi: TV actress Nia Sharma, who is currently seen as one of the contestants on TV reality show Khatron Ke Khiladi : Pain in Spain, celebrated her 25th birthday on September 17. Nia posted a couple of pictures from her birthday party last night, which she had at newly opened Barrel & Co in Andheri, Mumbai. In the pictures posted by Nia, she can be seen dressed in an aqua blue ensemble and is looking absolutely beautiful. On her birthday, Nia was surprised with not just one but a lot of cakes, that can be seen on the table. Nia is all smiles and is looking elated in the picture. Nia captioned the picture: "This looks pretty lit a Pre-birthday for someone with absolutely no plans to celebrate."

This looks pretty lit a Pre-birthday for someone With absolutely no plans to celebrate.. ..counting

Nia celebrated her birthday with close friends and colleagues from the industry. Actress Anita Hassanandani, who recently returned after vacationing in the Swiss Alps, also posted a picture on Instagram with Nia and other friends on her birthday. She wrote: "HappyHappyHappy Birthday Nia!"

Nia Sharma is currently seen in Khatron Ke Khiladi, hosted by Rohit Shetty and is performing really well in the tasks. She also got ticket to finale and became the first finalist on the show. Nia, who made her TV debut with Kaali- Ek Agnipariksha, has also featured in shows likeEk Hazaaron Mein Meri Behna Hai, Jamai Raja and Comedy Nights Bachao. Nia was ranked No. 3 in the Top 50 Sexiest Asian Women List in 2016.
Comments
Nia sharmaKhatron Ke Khiladianita hassanandani