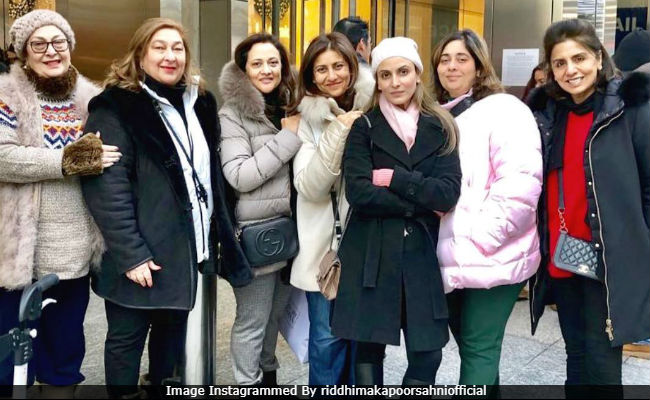 Riddhima shared this picture with Neetu Kapoor and others (Image courtesy: Instagram)

Celebrity couple Rishi and Neetu Kapoor's daughter Riddhima Kapoor Sahni arrived in New York over the weekend to meet her parents. Riddhima is accompanied by husband Bharat Sahni and daughter Samara. She has shared snippets from her trip and it appears they are having a fabulous time. In the pictures, we see Neetu Kapoor and Riddhima posing with family members like Rima Jain and Nitasha Nanda. "Famjam" and "NYC diaries" are the hashtags used by Riddhima to caption her post. In another photo, she poses with Bharat Sahni and Samara. Rishi and Neetu Kapoor moved to the US in September. The 66-year-old actor is currently undergoing medical treatment in the Big Apple. However, what exactly he's being treated for has still not been disclosed.

Inside Neetu Kapoor and Riddhima's famjam in New York.

A post shared by Riddhima Kapoor Sahni (@riddhimakapoorsahniofficial) on Dec 23, 2018 at 5:36pm PST

A post shared by Riddhima Kapoor Sahni (@riddhimakapoorsahniofficial) on Dec 23, 2018 at 5:41pm PST

Riddhima Kapoor Sahni and Bharat Sahni married in 2006. Their daughter Samara is 7-years-old. Riddhima is a jewellery designer and is based out of Delhi.

Rishi and Neetu Kapoor's son Ranbir had accompanied them to New York. He returned to India after a month (in October).

Meanwhile, Neetu Kapoor constantly keeps her Instafam updated with updates from New York. Here are some of the pictures.

One freezingggg evening in NYC

Before flying to the US, Rishi Kapoor tweeted that he is "taking a short leave of absence from work" and going for medical treatment and also requested everyone "not to unnecessarily speculate." However, it was speculated that he had been diagnosed with cancer, but the reports were dismissed by his elder brother Randhir Kapoor.

On the work front, Rishi Kapoor was last seen in Netflix's Rajma Chawal.