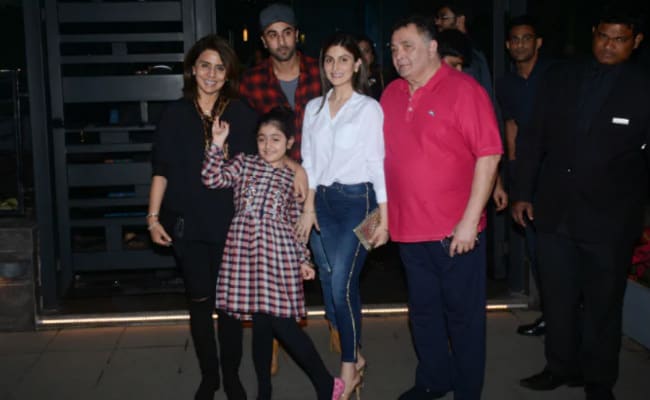 "Thank you for bringing a meaning to our lives," wrote Neetu Kapoor

On Children's Day, Neetu Kapoor shared an emotional note on Instagram along with a brief account of how Rishi Kapoor dealt with daughter Riddhima Kapoor Sahni leaving the Mumbai house after her wedding. Sharing the screenshot of an article originally published by DNA, Neetu Kapoor revealed that Rishi Kapoor would be upset if Riddhima failed to respond to his video-call requests soon after her wedding. The veteran actor only got comfortable with flexible call timings after Neetu explained to him that Riddhima must be busy juggling family commitments in her new home. Riddhima, a jewellery designer, married Bharat Sahni in 2006 and moved to the National Capital. The couple are parents to six-year-old daughter Samara. Neetu and Rishi Kapoor are also parents to actor Ranbir Kapoor.

"Without children our wallets would be full: houses clean : anxiety levels lower : but our lives would be incomplete, Thank you for bringing a meaning to our lives and for being a reason of our existence," Neetu Kapoor captioned the post." If his first born was too busy and couldn't take his call, the Bollywood veteran would be upset. After a point, it was Neetu who made him understand that since Riddhima was busy shouldering her responsibilities of being a wife, mother and a daughter-in-law, he needed to be flexible with his face-time routine," read an excerpt from the article shared by Neetu.

Without children our wallets wld be full : houses clean : anxiety levels lower : but our lives wold be incomplete thank you for bringing a meaning to our lives n for being a reason of our existence

Last year, Rishi Kapoor tweeted to say he's "proud" of Riddhima after she was named one of the top 25 entrepreneurs in New Delhi. Rishi Kapoor has also often given shout-outs to Ranbir for his performances, especially in Sanju.

Riddhima you make me so proud to be one of the top 25 entrepreneurs in Delhi. Love you darling! Jai Mata Di! pic.twitter.com/Ze9987XbQ7

In a piece for NDTV previously, Riddhima described her actor-father in these many words: "My dad is as honest on Twitter as he is in real life - he is a very straightforward and that's what's amazing because in today's times, we need more people like him who are not afraid to speak their mind and are totally frank about certain issues, so kudos to him."

Neetu Kapoor and Rishi Kapoor are currently in New York, where the actor is undergoing treatment. Before resuming work for Brahmastra, Ranbir spent some time with his parents in the Big Apple. In previews interviews, Ranbir opened up about his not-so-friendly rapport with Rishi Kapoor and had even confessed that confronting his father has never been his strongest game and that Neetu Kapoor acts as a mediator. Last month, Riddhima was the only one from Rishi Kapoor's family who attended Krishna Raj Kapoor's funeral as others had already left for New York.

On the work front, Rishi Kapoor was last seen in Mulk and has taken a break from work for treatment. He will next be seen in Rajma Chawal.