In a photo shared on fan clubs, Kareena and Amrita can be seen walking the streets of London with huge shopping bags 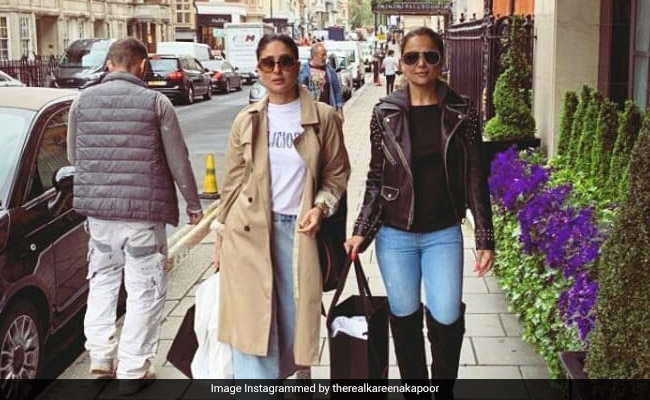 Two besties are currently taking London by storm and they are Kareena Kapoor and Amrita Arora! The 38-year-old actress managed to take some time off her busy schedule to go vacationing to London. Now, Kareena may not have an official Instagram account but her fans and BFF Amrita Arora are doing a great job of keeping us updated as and when she makes pit stops in and around the English capital. On social media, last we spotted Kareena and Amrita on a shopping spree. In a photo shared on fan clubs, Kareena and Amrita can be seen walking the streets of London with huge shopping bags. Kareena, who believes she can make jeans and tee "look like couture", sported just that combo with a beige overcoat.

Take a look at Kareena Kapoor's shop till you drop photo:

When in London, Kareena Kapoor and Amrita Arora also caught up with their friend Natasha Poonawalla. Amrita Arora shared a glimpse of their girls-only-dinner date on her Instagram story. In the photo, the quartet can be seen dressed in all black for their night out.

friends having a blast in london

Ahead of that, Kareena and Amrita were spotted twinning in black as they took over London. Kareena's wardrobe pick for the day was black tee and flared denims while Amrita also sported the same combo paired with a leather jacket.

i am living for these pictures

best friends day out in london