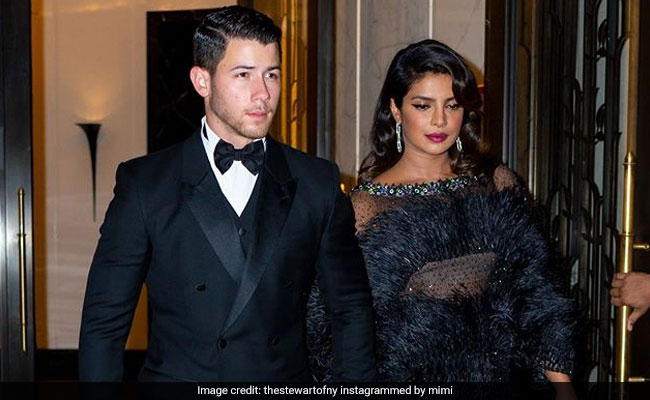 Priyanka Chopra and Nick Jonas had a blast as Joe Jonas rocked New York with the echoes of his birthday celebrations. Joe Jonas turned 30 on August 15 and celebrated the landmark with a James Bond-themed party on Friday evening, reported People. Glimpses of Joe's birthday celebrations have spilled on to Instagram, shared by guests, whose wardrobes choices were restricted to classy black and white in sync with everything 007. Priyanka and Nick checked into the Cipriani Wall Street in New York, hand-in-hand - she stellar in a Ralph and Russo flirty dress and he in a super-sharp tuxedo piece. Mimi Cuttrell, who styles the 37-year-superstar, described Priyanka in the best possible way: "The gorgeous."

Sophie Turner, who married the birthday boy in June, wrote a quirky message for her husband: "Happy Batday, Birthman." At the party, Sophie turned heads in a cut-out black ensemble while Joe Jonas was easy to spot in white.

Here are some other fun moments from the Bond-themed party shared by guests like actor Emilio Vitolo and Stranger Things actor Michael Park. Swipe left to see glimpses of Priyanka and Nick.

Earlier, Sophie had surprised Joe Jonas with a birthday cake on stage during the Jonas Brothers' Washington DC concert of the ongoing Happiness Begins tour.

Couldn't have asked for a better night, thank you all so much. Nothing better than doing what I love with my loves on my birthday #HappinessBeginsTour

Happiness Begins is the Jonas Brother's first mega tour after they reunited earlier this year. The Jonas Brothers will cover over 70 locations across North America and Europe as part of their tour, which comes to an end next year with the final performance in Paris on February 22.