Inside Huma Qureshi's House - A Glimpse Of Her "Favourite Corners"

"Putting together a few photos of some of my fave corners," wrote Huma Qureshi 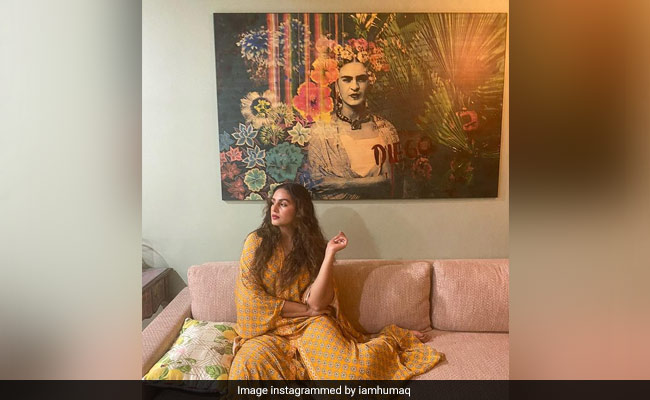 Huma Qureshi brightened up our Instagram feeds by sharing bright pictures from her vibrant house. The actress shared a glimpse of some of her favourite corners of her Mumbai residence. In the first picture, Huma can be seen gracefully posing on a sofa, with a giant picture of the evergreen artist Frida Kahlo in the background. In the second shot, the actress can be seen posing next to a chair and some flowers on the side. There's also a gallery corner with pictures from her photo archives. Another corner had a contemporary finish to it with ice blue walls decorated with some art pieces to go with it. Oh, don't forget the hint of green with the climbers on the outdoors.

"Slowly but surely my home is coming together... Putting together a few photos of some of my fave corners," wrote Huma Qureshi, sharing the pictures. She also thanked the people who helped her curate the pieces and with the designing of her "beautiful furnishings and wallpapers... and for my gigantic Frieda." In the comments section, the actress' Instafam dropped remarks like "Looks beautiful" and "so nice."

Huma Qureshi had a busy year with back-to-back releases. She starred in Zack Snyder's zombie film Army Of The Dead and the web-series Maharani, for which she received massive praise. She is best-known for starring in the Gangs of Wasseypur series, Ek Thi Daayan, Jolly LLB 2, Badlapur, Leila, Kaala and Leila to name a few. She will next be seen in Bell Bottom, co-starring Akshay Kumar, Lara Dutta and Vaani Kapoor.