Kangana Ranaut, who was injured while filming Manikarnika: The Queen Of Jhansi in Jodhpur, has been advised to take rest 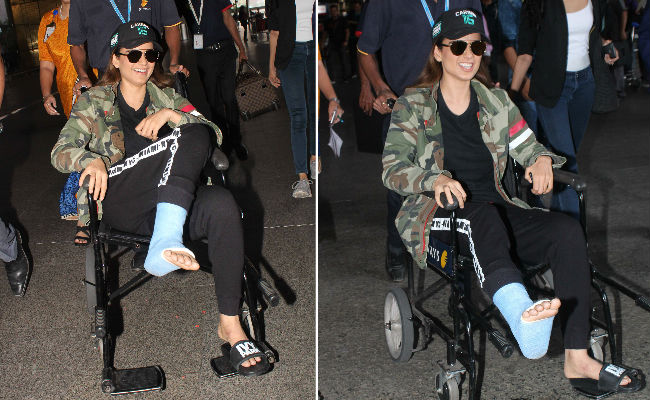 Kangana Ranaut at the Mumbai airport.

New Delhi: Actress Kangana Ranaut, who injured her ankle while filming an action sequence on the sets of her upcoming film Manikarnika: The Queen Of Jhansi, was discharged from a hospital in Jodhpur on Wednesday. The 30-year-old actress was photographed at the Mumbai airport, escorted by her team as she arrived on a wheelchair with her right leg secured in a cast. Kangana, who smiled and posed (yes, posed) as the photographers clicked pictures of her, told media persons: "During this scene, I stumbled and injured my right ankle. There was nothing serious. It was just a sprain," reports news agency PTI. After being discharged from the hospital, Kangana was taken back to her hotel in Jodhpur where she took rest before returning to Mumbai. 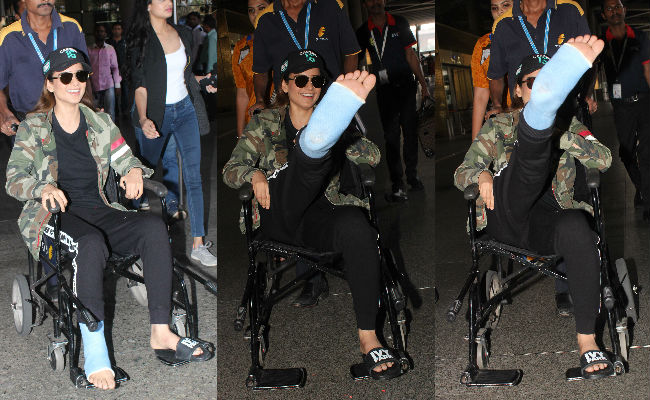 Kangana was injured while filming a scene at the Mehrangarh Fort, where she had to jump off from a 40-feet-high wall with a child (in the role of Rani Laxmibai's adopted son) tied to her back. "Kangana did not land properly and in an attempt to save the kid from any injury she ended up hurting her ankle. She was taken to a hospital immediately and it has been discovered that it is a ligament tear. She has been advised rest for one week," a source told PTI. "We did an X-ray and found that there was no fracture. It was just a sprain, after which we put a cast and recommended her to rest for some time," said Dr Pulkit Goyal, who treated Kangana in Jodhpur.

Kangana has already filmed several dangerous action sequences for the film and this was apparently the last stunt left for filming. Earlier in July, Kangana was severely injured during the shoot of a sword-fighting sequence with co-star Nihar Pandya in Hyderabad.

Promoted
Listen to the latest songs, only on JioSaavn.com
Manikarnika: The Queen Of Jhansi is directed by Krish and co-produced by Kangana Ranaut. The film also stars Sonu Sood and Anikita Lokhande and is scheduled for April 2018 release.