In ROFL Post, Ram Kapoor Writes 'Wish I Was Held With So Much Love' On Pic Of Wife Gautami And...

Ram Kapoor shared a photo of wife Gautami hugging their pet with this caption: "Wish I was held with so much love" 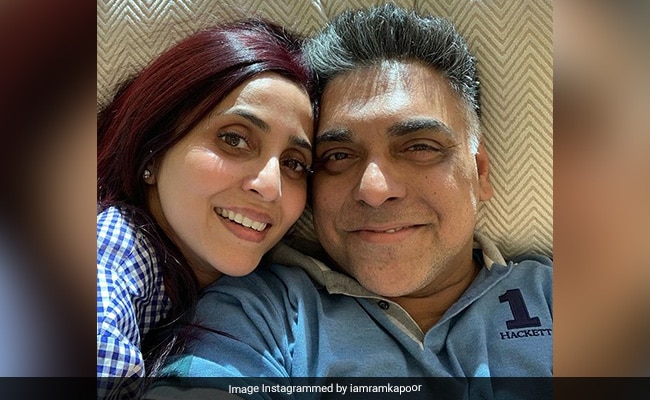 Actor Ram Kapoor's Instafam woke up to an adorable photo of his wife Gautami, cuddling their pet dog and an ROFL caption attached to it. The 46-year-old actor, who often trends for Instagram posts dipped in his signature sense of humour, let out a long sigh on Instagram as he captioned the photo in these words: "Wish I was held with so much love" and added the rolling eye emoji. LOL. Meanwhile, Gautami, who is also an actress, couldn't hold back her laughter as she emptied her stash of the ROFL emojis on Ram Kapoor's Instagram post. It's pretty funny, actually. Here, take a look:

Wish I was held with so much love

Well, in a previous post, Ram Kapoor wrote this while thinking out loud: "My wife is jealous of our love." Wonder who was taking the video!

My wife is jealous of our love

Meanwhile, Ram Kapoor's Instagram is filled with adorable glimpses of Gautami and their four-legged companion. Like this one here is cuteness overload.

One of Ram Kapoor's posts about husband woes shot up the trends list last year, in which he showed what happens when "you ask an angry wife to make a sandwich."

Ram Kapoor became a popular name in the television section after his 2000 show Ghar Ek Mandir, in which he shared screen space with wife Gautami. He is best known for starring in shows such as Kyunkii... Saas Bhi Kabhi Bahu Thi, Dil Ki Baatein Dil Hi Jaane and Kasamh Se. Apart from small screen, Ram Kapoor has also featured in films such as Student Of The Year, Shaadi Ke Side Effects, Karthik Calling Karthik and Baar Baar Dekho. He was last seen in ALTBalaji's web-series Karrle Tu Bhi Mohabbat.