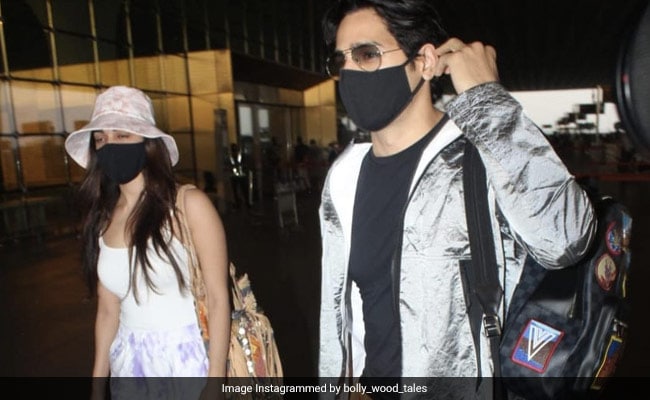 It's holiday season, which also marks the return of airport looks. On Tuesday, we spotted Deepika Padukone and Ranveer Singh, Alia Bhatt-Ranbir Kapoor and their families at the Mumbai airport. The latest Bollywood stars who were spotted at the Mumbai airport are rumoured couple and Shershaah co-stars Kiara Advani and Sidharth Malhotra. This is the first time that the actors were spotted together by the paparazzi. We loved Kiara and Sidharth's airport style. Kiara opted for a white top and printed pyjamas. She accessorised her look with a hat and a brown tote with tussles. Sidharth wore a black t-shirt with orange pants and threw over a silver jacket.

Last month, during the promotions of her film Indoo Ki Jawani, Kiara Advani, in an interview with Pinkvilla was asked what she would write in Sidharth Malhotra's Tinder bio, to which she replied, "I don't want to put him on Tinder."

Kiara Advani and Sidharth Malhotra frequently trend for their Instagram and Twitter exchanges. Sidharth posted a picture of Kiara Advani on her 28th birthday, on his Instagram story and he wrote: "Happy birthday sunshine girl. Big love and hugs." Replying to his message on her Instagram story, Kiara wrote, "Thank you, Monkey."

Kiara Advani was last seen in Indoo Ki Jawani, co-starring Aditya Seal. Other than Shershaah, her upcoming projects include Bhool Bhulaiyaa 2, opposite Kartik Aaryan and Jug Jugg Jeeyo with Anil Kapoor, Neetu Kapoor and Varun Dhawan. Sidharth Malhotra was last seen in the music video Masakali 2.0, opposite Tara Sutaria. His next project is Mission Majnu.