While you may think that Janhvi Kapoor's trip to New York is all play and no "work-out", that's not completely true 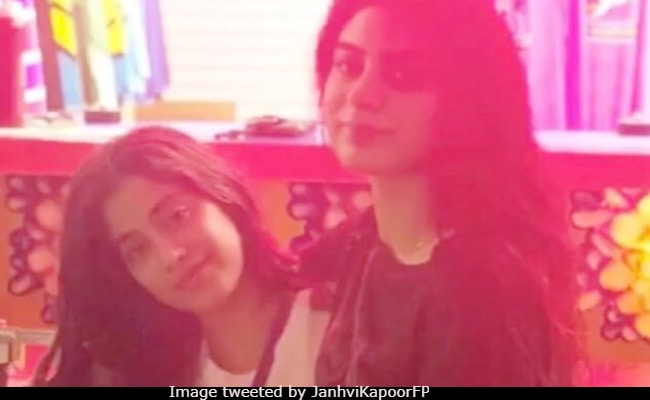 Guess where Janhvi Kapoor and her sister Khushi are? The Kapoor sisters are chilling in New York, as suggested by fan clubs on social media and also brother Arjun Kapoor (more on that later). Pictures and videos of Janhvi and Khushi hanging out together have been shared on social media, in which Amitabh Bachchan's granddaughter Navya Naveli Nanda can also be spotted. While Janhvi has not really shared updates on her social media accounts, a particular click of Janhvi, in which she adorably poses with Khushi, is crazy viral. In another viral video, which originally appears to be an Instagram story, Janhvi can be seen having lunch with Navya Naveli and other friends.

Video | Janhvi Kapoor having lunch with her friends in New York. #JanhviKapoorpic.twitter.com/lPqEhpCm84

While you may think that Janhvi Kapoor's trip to New York is all play and no "work-out", that's not completely true, as revealed by Arjun Kapoor in a comment on Janhvi's Instagram. On Monday, the Dhadak actress shared the first look of Arjun from his upcoming film India's Most Wanted and this is what Arjun had to say in response: "That's my look when I realise you went to New York and straight ran to work out instead of six flags!"

This is how Janhvi introduced India's Most Wanted: "Where did your chill go?"

Where did your chill go???? #IndiasMostWanted

When in Mumbai, Janhvi also recently went on dinner with Priyanka Chopra and spotted partying with Sara Ali Khan and Ananya Panday, both of who are awaiting the release of their Bollywood debuts. About competition with her contemporaries, she recently told DNA: "I don't know why everyone is pitting us against each other. I guess people enjoy doing that. Competition is a bad thing if you make it sound that way."

Janhvi Kapoor made her debut in Bollywood with Dhadak, which turned out to be a hit! Dhadak also marked Janhvi's first project with Karan Johar, whose Dharma Productions produced the film. Now, Janhvi has also been roped in for Takht - an upcoming film to be directed by KJo. The cast of Takht also includes names like Kareena Kapoor, Anil Kapoor, Alia Bhatt, Vicky Kaushal, Bhumi Pednekar, Janhvi Kapoor and Ranveer Singh.