In Maldives, Surbhi Chandna Had Breakfast With A Stunning View

"I decided to take a dip in the ocean only to come back to a surprise planned," wrote the actress 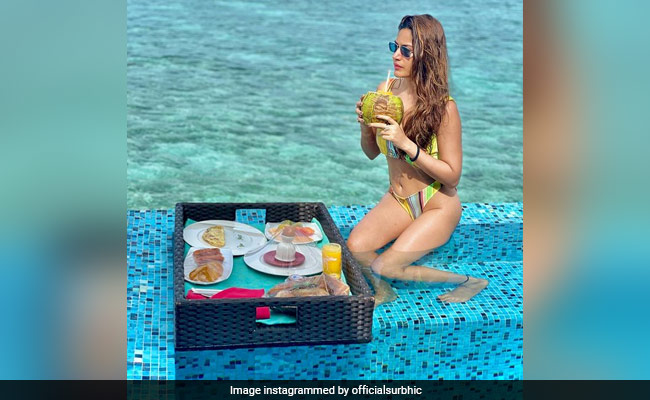 TV star Surbhi Chandna's Instagram posts are making us go green with envy. The actress, who is holidaying in Maldives, has actively been sharing pictures from her vacation and they are things pretty. On Wednesday, she shared pictures from her day out in the island nation. She also shared pictures of her floating breakfast. In her caption, Surbhi revealed what her day was like and wrote: "This morning before I check out, I decided to take a dip in the ocean only to come back to a surprise planned." She added the hashtags #floatingbreakfast and #swipeleft.

In a separate post, the Naagin actress shared her snorkeling and kayaking experiences and she wrote: "What an afternoon of snorkeling, spotting a sea turtle thank god for the clear visibility deep down and entering a world of never seen before stunning looking water babies (read fish ). Thanks to my Guide Ali at Coco Bodhu Hithi for the best experience ever."

Surbhi Chandna, a popular name in the Hindi entertainment industry, became a household name after starring in the TV show Taarak Mehta Ka Ooltah Chashmah and she went on to star in hit TV shows like Qubool Hai, Ishqbaaaz and she was also seen in the second season of Sanjivani. She has also appeared in Vidya Balan's film Bobby Jasoos.