In Before-After Pics, How Arjun Kapoor Is "Bettering" Himself Every Day

"My mother told me every stage of your life is a journey and you will always be a constant work in progress. I understand the meaning of that now more than ever," wrote Arjun 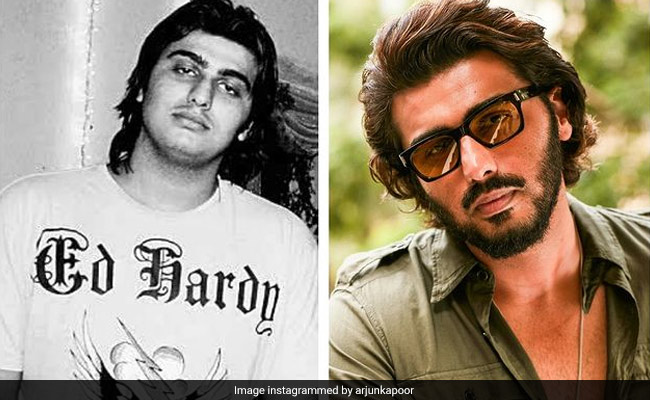 In terms of fitness, Arjun Kapoor has sure come a long way. The actor, who was once overweight, underwent major physical transformation before making his acting debut with the 2012 action-romance Ishaqzaade. But Arjun has never had any regrets about his physique. The actor loves every phase and "every chapter of his life." In an Instagram post on Tuesday, Arjun Kapoor shared he has been "working towards bettering" every day and just like everyone else, he is also a "work-in-progress." In her post, Arjun Kapoor also shared a piece of advice that his late mom Mona Shourie had told him.

"Pehle main bohot mota bohot pareshan tha.... No, no this is not one of those posts. Just putting it out there that I love every chapter of my life. Those days and even now, I have always been myself at every step of the way. I cherish every bit. I'm a work in progress like anyone and everyone else," wrote the actor and added "My mother told me every stage of your life is a journey and you will always be a constant work in progress. I understand the meaning of that now more than ever and I'm loving that I'm working towards bettering myself... every damn day!"

Before making his acting, Arjun Kapoor was working as an assistant director for Nikkhil Advani's 2007 film Salaam-E-Ishq. Back in 2018, the actor even posted a throwback photo with Nikkhil Advani, in which he looks overweight. Check it out here:

Arjun Kapoor, who has starred in films like Aurangzeb, Gunday and 2 States, was last seen in Sardar Ka Grandson, in which he co-starred with Rakul Preet Singh. The actor will next be seen in Bhoot Police and Ek Villain Returns.

No Need For Filters If You Are As Stunning As Sunny Leone. See Pic From Her Maldives Vacation