In Akshay Kumar Vs Mallika Dua, Twinkle Khanna, Who 'Addressed The Controversy' Earlier, Has Something New To Say 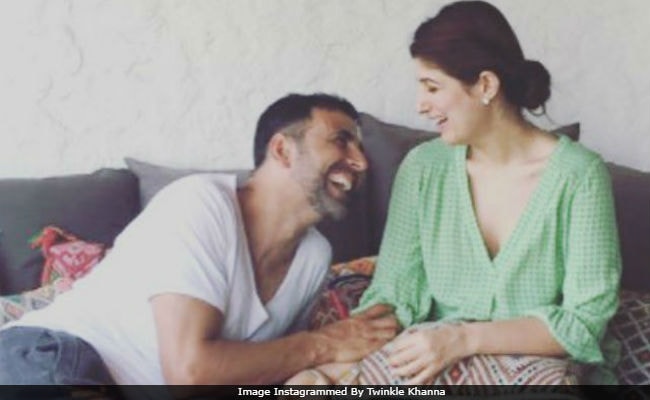 Twinkle Khanna and Akshay Kumar have been married since 2001 (Image courtesy: twinklerkhanna)

New Delhi: Amid the ongoing battle surrounding actor Akshay Kumar and his The Great Indian Laughter Challenge colleague Mallika Dua, author Twinkle Khanna 'addressed the controversy' by posting a statement on Twitter. Twinkle, Akshay's wife, said that she would like to be kept out of the conversation but not without giving her opinion on the matter. Few hours after posting the statement, Twinkle, shared two 'lame jokes,' as she describes it and wrote, "What is Akshay Kumar's favourite car? Bell Gadi" and "Why did Akshay Kumar go to the mosque? He wanted to hear some duas." In The Great Indian Laughter Challenge, the judges are made to ring a bell, if they like a contestant's act. Akshay's 'ring a bell' comment refers to the same. News agency IANS reported that the clip has not been aired by the channel, but it went viral on the Internet.

After the controversy started trending, Mallika Dua's father Vinod Dua, told IANS that he "expects an apology" from Akshay Kumar for his comment. Twinkle, in her statement, shared previously, wrote, "Should Mr Dua's statement also be taken literally or interpreted in context? Words, especially humour has to be seen in its right context." Vinod Dua had also posted a note of Facebook, which now appears to be deleted.

Soon after the clip went viral, Mallika Dua, also posted her version and tweeted that it is "not about Akshay Kumar, instead it is about every big star, who cannot differentiate between charm and harm." "This is about every big celebrity who thinks his colleague enjoys being grabbed by the waist and twirled without her consent. This is about workplace etiquette for everybody, men and women included, and about understanding the idea of professional communication so we don't make someone uncomfortable in their place of work, unintentionally or otherwise," she wrote.

Mallika Dua, along with Zakir Khan and Hussain Dalal, were the mentors on The Great Indian Laughter Challenge while Akshay Kumar features as super judge.

Akshay Kumar, 50, and Twinkle Khanna, 42, have been married since 2001. They have two children, son Aarav and daughter Nitara. Akshay won the National Award for Best Actor this year, for 2016 film Rustom. His last released film Toilet: Ek Prem Katha was a blockbuster. Padman, a film produced by Twinkle, and 2.0, with Rajinikanth, hits the screens next year. Twinkle Khanna, a former actress, is now a best-selling author.
Comments
Twinkle Khannatwinkle khanna akshay kumarMallika Dua