Karan Johar shared another episode of "Lockdown With The Johars" with his twins stealing the show, as usual. 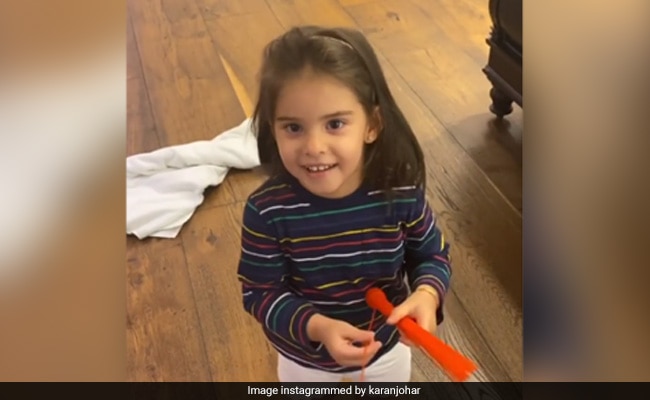 Roohi and Yash in a screenshot from KJo's video (courtesy karanjohar)

Well, Karan Johar's kids Roohi and Yash have a lot to say about their Dada. The 47-year-old filmmaker shared another episode of "Lockdown With The Johars" with his twins stealing the show, as usual. In the video, the single-father can be seen asking his kids about their favourite animals but what he didn't expect was perhaps Roohi's prompt answer when asked which animal Karan Johar reminds them of. "If Dada was an animal, what would he be?" he asked his kids and got this in response: "Elephant!" Roohi even says: "Hello, elephant!" making KJo confess: "I'm crying now." Karan Johar shared the ROFL video with these words: "Well guess which animal I remind them of?"

Well guess which animal I remind them of? #lockdownwiththejohars #toodles #season 2 @officialpeppa

On Thursday, Roohi and Yash, who love to roam around KJo's swanky walk-in closet and shredding his fashion choices, decided to say something about his age.

He's off to london and she has pronounced me elderly! Such is my life! #lockdownwiththejohars

On Wednesday, we had Karan shared a video of Roohi and Yash singing with this caption: "Clearly singing is not in our genes! Apologies in advance!" Now you know what not to expect from the video.

Clearly singing is not in our genes! Apologies in advance ! #lockdownwiththejohars #toodles

On Tuesday, we found Roohi and Yash acting as Karan Johar's "diet police" by telling him he should skip the burger. "My diet police betu boy Yash and baby girl Roohi," he wrote.

On Monday, Roohi and Yash were in a mood to make fun of Karan Johar's clothes and so, they did this.

Karan Johar became a single parent when Roohi and Yash were born via surrogacy in 2017. On the work front, he will be directing the much awaited period piece Takht.