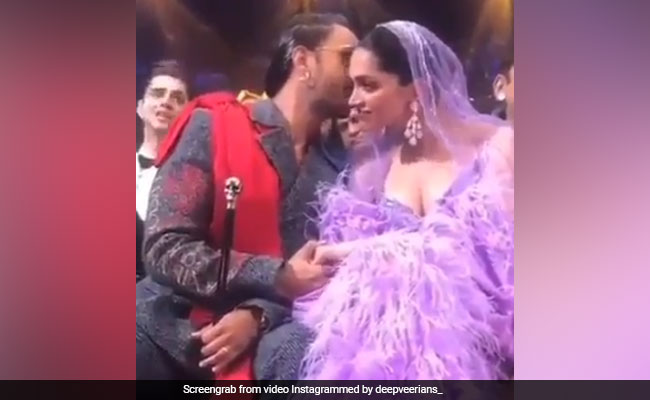 There can never be too much of Ranveer Singh and Deepika Padukone's PDA, who once again won hearts at the IIFA Awards 2019 on Wednesday with their mushy moments. We are talking about Ranveer Singh's oh-so-adorable gesture right before he went on stage to get his Best Actor prize. Wondering what he did? As Ranveer's name was announced as the Best Actor for "Padmaavat", he left his seat, adorably kissed Deepika and then got on the stage. He also dedicated a part of his emotional yet hilarious speech to his wife (but more on that later). Ranveer Singh never misses a chance to show his love for his wife. He was Deepika Padukone's constant companion throughout the event, especially when he was helping her to walk around with her long veil.

Deepika Padukone was the star of Sanjay Leela Bhansali's "Padmaavat" but she lost the Best Actress Award to actress Alia Bhatt, who won for her performance in Raazi. Meanwhile, Deepika won Best Actress Special Award for her 2013 film Chennai Express at IIFA. She rocked the green carpet last night in a feather off-shoulder gown, paired with dramatic sleeves and an oversized veil while Ranveer arrived at the event in quirky outfit.

Now, check out the aforementioned video and photos shared by fanpages dedicated to the couple on Instagram.

Crediting Deepika Padukone for inspiring him, Ranveer said in his speech: "My beautiful wife, you inspire me everyday baby, every day... My wife is sitting in the front row, looking damn proud of me and fine. What more could I ask for?" The 34-year-old actor also couldn't control his excitement, when he was told at IIFA that his wax statue will be placed right next to his wife's statue at Madame Tussauds, London. Looking at Deepika, he replied: "I had the honour to attend Deepika's wax statue launch. My wife's statue is the sexiest. Morgan Freeman's statue is my favourite. But well, husband and wife. Boom baby, mera putlaa England mein, proud Indian."

There's another video of the Bollywood couple that's trending incessantly on social media, in which Deepika and Ranveer can be seen engrossed in a conversation with each other at the awards. Going by the clip, it appears that some personal joke had cracked Ranveer and Deepika up at IIFA.