Maheep Kapoor was the first one to drop the fire emoji on Karisma's post and Karisma's Instafam followed suit. 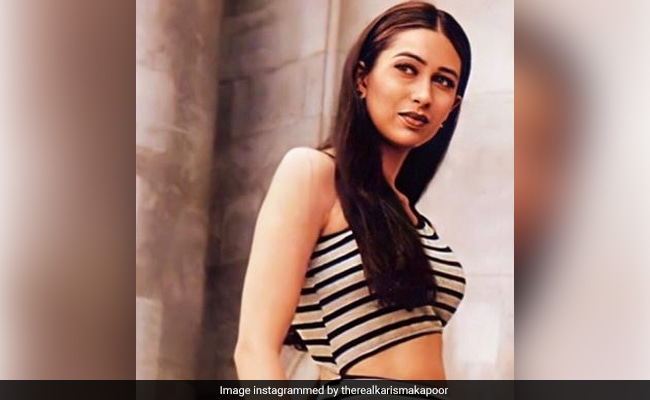 Drop everything. It's time for Karisma Kapoor's Flashback Friday treat. Karisma Kapoor's Flashback Friday posts have become quite a ritual and Instagram lives for it. The 46-year-old actress, without fail, reminds us of the power of nostalgic memories with her posts. She just added one more to the list, which appears to be a photo from the late Nineties or early Twenties. Karisma Kapoor's sartorial choices redefined fashion trends at that time, a glimpse of which is revealed in her throwback post. The actress is gorgeous in a monochrome, cut-out ensemble, which surely is a timeless piece. Karisma simply captioned her photo as "#FlashbackFriday" and let the nostalgia do all the talking. Maheep Kapoor was the first one to drop the fire emoji on Karisma's post and Karisma's Instafam followed suit.

Here's a page out of Karisma Kapoor's throwback archives:

Now if you thought that was trendsetting, check out this retro outfit of Karisma Kapoor. Aren't button down cardigans making a comeback already? She co-starred with Salman Khan in Dulhan Hum Le Jayenge and this photo is from the film's song Pyaar Dilo Ka Mela Hai. "I vividly remember the sun was setting and we needed to get this shot done while Salman Khan was making us all laugh," she wrote.

I vividly remember the sun was setting and we needed to get this shot done while sk was making us all laugh ???????? fun times in #mauritius ????⛱ Guess the film and song ? #flashbackfriday #guessinggame???? #memories

Can you pull of a crop top and skirt like Karisma Kapoor did in this Flashback Friday post?

Just a regular rainy afternoon ???????? Any guesses which song this is from ?? #flashbackfriday #guessinggame????

Last month, Karisma Kapoor celebrated Ganesh Chaturthi with her family. Professionaly, she was last seen in 2012 film Dangerous Ishhq, after which she featured in special roles in films such as Bombay Talkies and Zero.