Ibrahim Ali Khan's expressions are just too good in the video 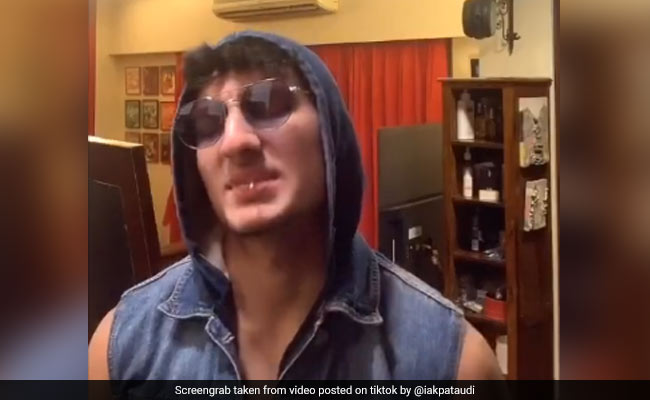 Ibrahim in a still from the video. (courtesy: iakpataudi)

TikTok fever seems to have taken over celebrities, especially during lockdown. Saif Ali Khan and Amrita Singh's son Ibrahim Ali Khan is also busy posting TikTok videos and they are trending across different social media platforms. Ibrahim, who is not particularly active on other social media platforms, seems to like TikTok quite a bit. Ibrahim recently posted a hilarious video on his TikTok handle, in which he could be seen lip-syncing to Shamshad Pasha's "Yaar meri biwi kho gayi" joke. Ibrahim, can be seen sporting two drastically different looks in the video - in the first look, he can be seen wearing a white shirt. In the latter, her sports a denim jacket and aviators. His expressions in the video are just too good.

Recently, Ibrahim, Sara and their mom Amrita Singh took the "Who Is More Likely" challenge and their responses to the questions were hilarious. Too much fun. Check out the video here:

Not so sure about sara in the end....

Meanwhile, Ibrahim trended a great deal for his selfie with comedian Kapil Sharma. The picture happened to be from the sets of Comedy Nights With Kapil. This is the picture we are talking about.

Ibrahim Ali Khan has some impeccable genes. His parents - Saif Ali Khan and Amrita Singh are Bollywood actors. His father is now married to Kareena Kapoor. His grandmother (Saif's mother) Sharmila Tagore is a veteran actress. His late grandfather Mansoor Ali Khan Pataudi was a legendary cricketer. Ibrahim's sister Sara, who made her Bollywood debut in 2018, has featured in films such as Kedarnath, Simmba and Love Aaj Kal. She will next be seen in Coolie No 1 (opposite Varun Dhawan) and Atrangi Re, alongside Akshay Kumar and Dhanush.