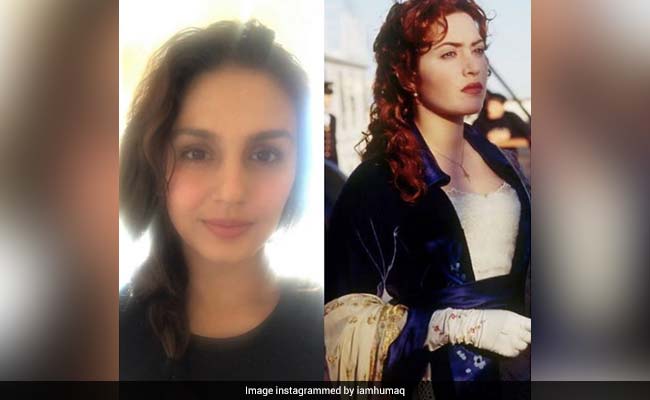 Huma Qureshi posted this as a part of #10YearChallenge. (Image courtesy: Instagram)

Huma Qureshi took up the ongoing #10YearChallenge as a part of which she shared a close-up photo of herself juxtaposed with a picture of Kate Winslet from James Cameron's iconic film Titanic. Huma's #10YearChallenge post is very different from the posts which are continually popping up on the Internet featuring then-and-now pictures of themselves. Sharing the collage, Huma Qureshi simply added the hashtag "10YearChallenge". The Internet is pretty amused with Huma's unique sense of humour. While some were still clueless as to why Huma juxtaposed a picture of herself with that of Kate Winslet's, others applauded her for coming up with "something different". "That's something so different!! Loved this meme. You look beautiful though," read one of the comment on the post. One of the Instagram users also suggested that Huma Qureshi is a good choice for Titanic sequel." Official.. confirmed.. Titanic remake."

Apart from Huma Qureshi, several other Bollywood celebrities shared #10YearChallenge posts on their respective social media accounts. Sonam Kapoor shared a still of herself from Delhi 6 juxtaposed with a picture from her upcoming film Ek Ladki Ko Dekha Toh Aisa Laga. Bipasha Basu also shared a still from 2008's Race and another from her new film Aadat. In both the pictures she can be seen dressed in black. Other celebrities to take up the challenge include Ekta Kapoor, Shilpa Shetty, Shruti Haasan, Mandira Bedi, Hazel Keech, Sagarika Ghatge and Esha Deol.

#10yearchallenge #23to33 from DELHI 6 to ek Ladki Ko Dekha toh AISA Laga.. do you think I got dads genes??? @anilskapoor

#Bouncing into the #10yearchallenge be like... Chanced upon this old picture and realised I'm striking the same pose since 2008... #samesamebutdifferent #instagood #hot #beachbody #poser

Here is my #10yearchallenge 22 years VS almost 32 years.... and how far I've come! I was battling depression, starving myself, had bulimia, dyed my hair dark and kept it long trying to fit in a please everyone around me but hiding all the pain with a smile and joke so no one knew. Today, i can confidently talk about what I've gone through, i dont care what others think of me, i finally had the courage to cut my hair, i dont try and fit in anymore and i am happier, healthier and more at peace with myself than i ever imagined i could be! Wahooo #personalcelebration thanks whoever started the 10 year challenge

On the work front, Huma Qureshi was last seen in Rajinikanth's Kaala and she hasn't announced her next project as of now.