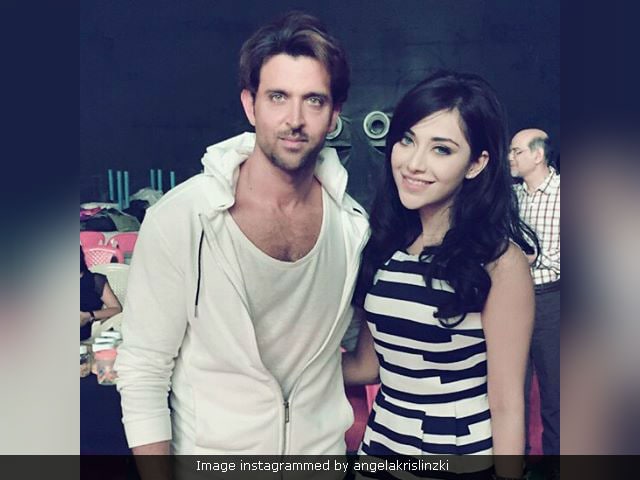 New Delhi: 'Dear lady, who are you?' tweeted a perplexed Hrithik Roshan on Tuesday morning. Angela Krislinski is an actress who stars in Puri Jagannadh's upcoming Telugu film Rogue - but that's not really the answer Hrithik's looking for. What he really wants to know is why she's claiming him as a 'friend and mentor.' We'd like to know too. Angela, last seen in a song sequence in the Anushka Shetty film Size Zero, was interviewed by DNA in which she revealed how Hrithik and she filmed two commercials together and how the 24-year-old star has apparently been involving himself in her career ever since. Some of what she's said in the interview is undeniably true - she did make two commercials with Hrithik - but it seems that a lot of it isn't. In his tweet, Hrithik Roshan asked why Angela Krislinski is lying:

My dear lady, who are you and why are u lying. pic.twitter.com/xydPrKr8nH

Her response awaited. Meantime, here's some of what she said to DNA.

Angela is part Polish, part Spanish - the last of which she claims helped her form a bond with Hrithik Roshan who filmed Zindagi Na Milegi Dobara in parts of Spain. "When I told him about my half-Spanish background, he was reminded about the old-world charm of Valencia and Spain. He was supportive and gave me acting tips," Angela Krislinski told DNAabout her first time filming with Hrithik. The second time round, they were apparently old friends. "I was under the impression that he had forgotten me. After all, he is a star who shoots umpteen ads with several young models. cand the fact that my dad was from Valencia. He also asked me jokingly whether the colour of my eyes was real. When I signed a movie in the South. He also inquired about the maker and assured me that this film would definitely take me places," Angela told DNA.

What's more, Angela Krislinksi told DNA that Hrithik and she were also meant to make a music video together which was cancelled because of an injury the actor allegedly suffered, and that he even plans to cast her in a film. "I consider Hrithik a mentor and keep him informed," Angela told DNA, adding, "I am happy that I have found a great friend and mentor in him. I would love to work with him again but I don't know when it will happen."

Promoted
Listen to the latest songs, only on JioSaavn.com
How much of this is untrue is not yet clear but Hrithik - and several of his followers on Twitter - seem utterly puzzled.

Hrithik Roshan was last seen in the Sanjay Gupta-directed Kaabil with Yami Gautam. He will soon collaborate with his father, filmmaker Rakesh Roshan, for Krrish 4.