Hrithik Roshan has shared an image of his yummy breakfast 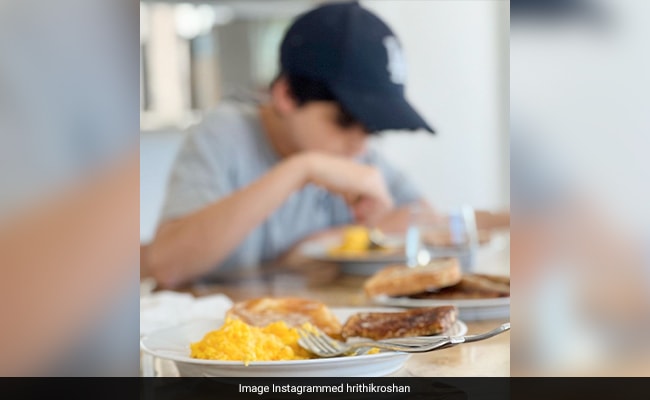 Hrithik Roshan is a man of many talents. That he can sing, dance and act like a thespian is no news but did you know that he has another skill up his sleeve? Well, if Hrithik Roshan's latest post on Instagram is anything to go by, the man can cook up a storm in the kitchen as well. Sharing that he has surprised himself with his cooking skills, Hrithik Roshan posted an image of his breakfast plate that comprised creamy, yummy scrambled eggs and buttered toast. In a second blurred image,  Hrithik's son can also be seen tucking into the tasty scrambled eggs.

Sharing the images, Hrithik Roshan said, “My god. I surprise myself; I tell you. I should cook more often. What a talent! I'm amazing ( all rubbish . But I choose to trust the little man hridz). Hehe.”

And, the comments show that Hrithik Roshan's cooking skills made quite the impression on his fans and colleagues. Hrithik's co-star of many films Preity Zinta said, “Pls learn so u can cook for us,” with a heart-eye emoji.

Hrithik Roshan's breakfast post comes just days after the actor shared a video in which he and his team are munching on burgers, fries, chips and sandwiches. In the clip, the actor and his team are seen sitting together and enjoying the meal. In the caption, Hrithik wrote, "Found myself a team who loves food as much as I do. Foodies assemble!" and added the hashtags "My Team" and "Travel Memories".

In the video, the actor is also seen asking his teammate to dig in while the rest pose with their plates full of burgers and fries.

Replying to the post, Hrithik Roshan's girlfriend Saba Azad said, “Hahahahahaha there's that "ok can we eat already" face." Deepika Padukone, who will be seen with the actor in Fighter, said, “Hey! Wait for me!”

Celebrity hairstylist Aalim Hakim, who is also seen in the video, replied to Hrithik's post saying, "And we love you more than the food. You are the best."

On the work front, in addition to Fighter, Hrithik Roshan will also be seen in the role of Vedha in Vikram Vedha, alongside Saif Ali Khan. The film is the Hindi remake of the 2017 Tamil hit, starring Vijay Sethupathi and R Madhavan.