In his caption he revealed what exactly he was "checking out": "Checking out on my peeps beyond 2 kms!" 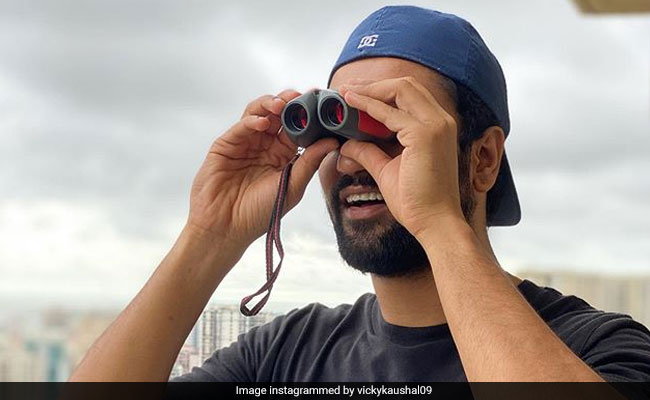 Actor Vicky Kaushal had a funny take on Mumbai Police's 2 km rule, which restricts movement of people beyond a radius of 2 km from their houses as lockdown restrictions are gradually being eased in phases. On Tuesday, the Sanju actor shared a few photos of himself, from what appears to be his balcony, in which he can be seen looking through binoculars. In his caption he revealed what exactly he was "checking out": "Checking out on my peeps beyond 2 kms!" LOL. Vicky Kaushal's post prompted a comment from Ishaan Khatter, who too is known for his sense of humour. "You'll need bigger ones... I'm at the balcony waving," wrote Ishaan. LOL again. Vicky Kaushal also reworked a famous dialogue from his film Masaan and added this hashtag: "#SaalaYehLockdownKaheKhatamNahiHotaBey." The original one spoken by him in the movie is: "Saala yeh dukh kahe khatam nahi hota bey."

Checking out on my peeps beyond 2kms! #mumbai #SaalaYehLockdownKaheKhatamNahiHotaBey

The 2 km rule was announced by the Mumbai Police on Sunday, after which the city witnessed massive traffic jams, especially near the city exits, as the police created multiple checkpoints to strictly enforce the 2 km-radius travel restriction applicable for all, barring office goers. Maharashtra has over 1,74,760 positive cases of coronavirus and Mumbai is the second worst-hit city in the country after Delhi.

Vicky Kaushal won the Best Actor National Award for 2019 film Uri: The Surgical Strike after which he starred in horror thriller Bhoot - Part One: The Haunted Ship, which remains his last film. His impressive line-up of films include a biopic of India's first Field Marshal Sam Manekshaw and a film on Sardar Udham Singh, a revolutionary freedom fighter.