Lisa Haydon loves to spend some quality time on the beach. Here's proof 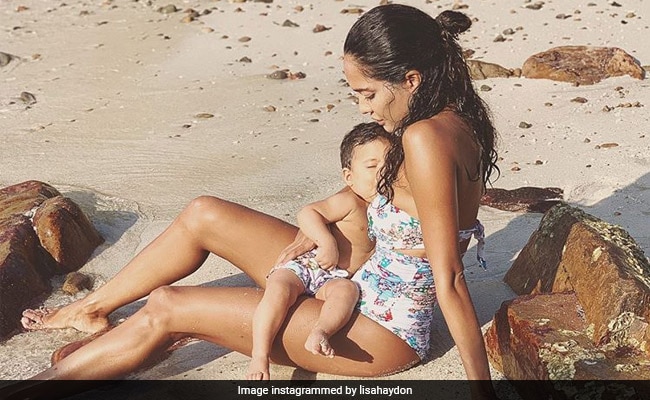 Lisa Haydon loves to spend some quality time on the beach. In case you are wondering why we are saying this, check out her latest post on Instagram. The actress, who every now and then posts pictures of herself from her beach outings, added one more photo to her beach album on Monday and it is the cutest thing you will see today. In the picture, Lisa Haydon can be seen soaking up the sun on the beach with her little son Leo resting on her lap. She looks gorgeous in what appears to be a floral-print bikini. Sharing the photo, Lisa wrote: "Beach baby." Here's the post we are talking about:

Lisa Haydon married entrepreneur Dino Lalvani in 2016 and the couple welcomed their first child Zack together in the year 2017 and son Leo in February this year. The actress frequently treats her fans to pictures and videos from her beach outings - most of them feature her surfing like a pro. A couple of days ago, she shared glimpses of herself surfing in Hong Kong. "Falling down isn't so bad," she captioned one of the posts.

Falling down isn't so bad

In terms of work, Lisa Haydon made her debut in Bollywood with Sonam Kapoor's Aisha, in which she appeared in a supporting role. She later went on to feature alongside Ajay Devgn, Sanjay Dutt and Kangana Ranaut in the 2011 film Rascals. In 2014, she featured in Queen, which marked her second film with Kangana Ranaut.

Lisa Haydon is best-known for her performance in the 2014 film The Shaukeens and the 2016 film Housefull 3. She was last seen in Ae Dil Hai Mushkil. Lisa Haydon has also been part of reality TV show India's Next Top Model and web-series The Trip.