"Having a younger sibling somehow makes the older one responsible, protective, mature, and even territorial," Shilpa Shetty wrote on Instagram 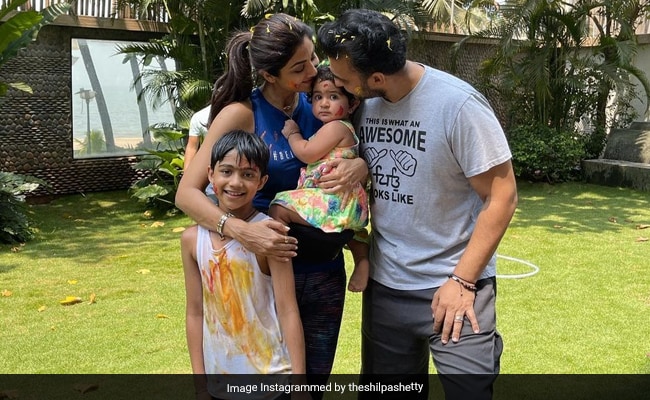 Actress Shilpa Shetty added one more adorable video to her family diaries on Instagram, this time, featuring daughter Samisha and son Viaan. Shilpa Shetty's video of Viaan and Samisha arrived as a celebration of Brother's Day. The 45-year-old actress made this observation about having two kids and wrote this about: "Having a younger sibling somehow makes the older one responsible, protective, mature, and even territorial (I would know!)" Talking about Viaan's bond with Samisha, Shilpa added: "I've had rakhi brothers much later in life but Samisha is lucky to have a real one. To see these visuals just makes my heart melt. Priceless! Happy Brother's Day."

In the video posted by Shilpa, Viaan can be seen treating his little sister Samisha to some coconut water. "Sharing is caring," Shilpa, who shot the video, can be heard saying.

On Viaan's birthday on Friday, Shilpa Shetty wrote a lengthy note about witnessing Viaan grow into a beautiful child: "There's so much to say, So much to do, You're growing up too fast, I'm not even done hugging you," read an excerpt from her post. Shilpa Shetty and Raj Kundra also introduced a new member to the family - a pet dog - on Viaan's birthday.

In terms of work, Shilpa Shetty was seen as one of the judges on the TV reality show Super Dancer Chapter 3. She is making her comeback to films after a gap of 13 years with Sabbir Khan's Nikamma.